On Wednesday, Hewlett-Packard Company (NYSE:HPQ) hit a new 52-week high for the second time since it reported quarterly earnings last week, despite a down day for the market as a whole. While the financial press and Wall Street analysts seem to be confused by HP’s performance, the company is well positioned for a return to modest profit growth next year and beyond. This is sufficient to justify a continued rise in Hewlett-Packard Company (NYSE:HPQ)’s stock price, since the company currently trades for just seven times earnings.

One of the biggest reasons why Wall Street analysts do not know what to make of Hewlett-Packard Company (NYSE:HPQ) is that some of its businesses are growing while others are declining. As a result, most analysts rate the stock a “hold,” which essentially means “I don’t know” in Wall Street speak. It also means that their clients missed out on a 100% gain over the past six months. 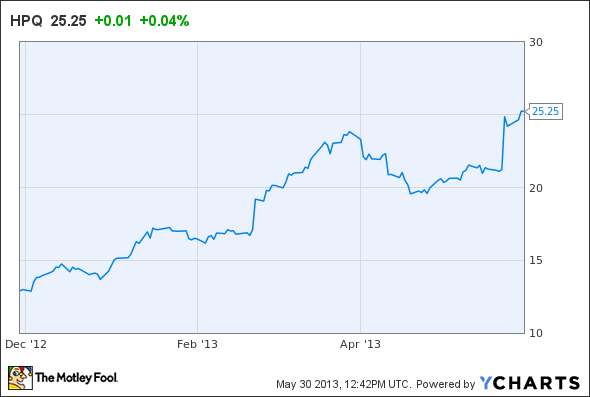 PCs and printers are both probably in permanent decline, though the trajectory may be bumpy. However, PCs are responsible for 10% or less of HP’s profits, and thus have a minuscule impact on company-level results. Meanwhile, the printer group is declining much more slowly, and actually posted strong year-over-year earnings growth due to margin improvement. Printers are a cash cow for HP and will continue to spin off lots of cash that HP can return to shareholders or invest in growth initiatives.

In the services business, HP provided guidance last fall for a double-digit revenue decline, due to several major account runoffs. However, CEO Meg Whitman expects the services business to provide moderate growth over the long term, particularly because HP is moving into new areas like cloud services and security. HP recently implemented one of the fastest rollouts of salesforce.com, inc. (NYSE:CRM) technology for the services business. This is expected to improve sales productivity going forward, and should also contribute to a return to revenue growth in 2014 or 2015.

In software, HP saw a slight decline in revenue but higher profit, similar to the printing business. However, the company continued to see strong growth for its Vertica database analytics software, while the scandal-ridden Autonomy division is starting to regain traction. The software division’s results show that you need to look below the “business unit” level to see the contrasting areas of growth and decline at HP.

The enterprise group faces a similar situation: HP’s long-running lawsuit with Oracle Corporation (NASDAQ:ORCL) has exacerbated the decline of its Itanium-based “Business Critical Systems.” However, some of the lost profit could potentially be recaptured if HP wins the lawsuit or reaches a favorable settlement (HP alleges that Oracle Corporation (NASDAQ:ORCL) sabotaged Itanium sales by withdrawing support for the platform in order to boost sales of its own servers). Revenue for industry-standard servers also declined, due in part to steep discounts offered by Dell Inc. (NASDAQ:DELL).

However, HP has finally unveiled its first “Moonshot” low-power servers, which could potentially be a game changer in the server market. Moonshot will probably have a limited impact on revenue this year, becoming a more significant chunk of HP’s server business in 2014. HP is also growing in networking (especially software-defined networking). Furthermore, HP announced on its recent conference call that its 3PAR storage business has surpassed a $1 billion revenue run-rate, helping offset declines in tape-based storage.