Following what seemed to be a relentless upward march in stock prices, we may be witnessing a shift in sentiment and the start of a period in which prices get reacquainted with downward volatility.

Hewlett-Packard beats the Street
What a difference a quarter makes. Dow Jones Industrial Average (DJINDICES:DJI) component Hewlett-Packard Company (NYSE:HPQ) reported its quarterly results after yesterday’s close, and investors seem to like what they see, sending the shares up 13% (in a market that is broadly declining, no less).

Nonetheless, that Hewlett-Packard Company (NYSE:HPQ)’s results should impress investors reflects the scale of the PC industry’s predicament. Sure, operating profit of $0.87 per share beat Wall Street’s consensus estimate of $0.81, but at $0.55 per share, net income fell by nearly a third. CEO Meg Whitman also told the Financial Times that PC revenue declined by a fifth year over year. 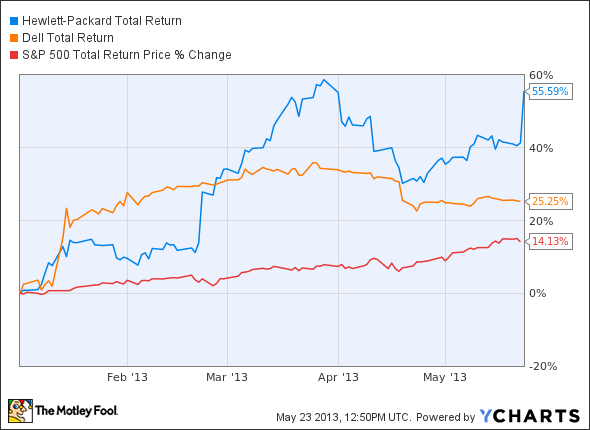 A 56% return looks like a stellar result, and investors may be tempted to jump onto this locomotive. However, it’s worth remembering that Hewlett-Packard Company (NYSE:HPQ) shares started the year at an atrociously depressed valuation: On Jan. 1, they closed at just 4.3 times the next 12 months’ earnings-per-share estimate. At yesterday’s close, the multiple stood at six; that increase accounts for roughly three-quarters of the share price return over the same period.

When a share’s valuation has been crushed and there is massive uncertainty concerning the company’s prospects, one can expect to witness substantial volatility in the price multiples subsequently. The latest results may be the start of a successful turnaround by Meg Whitman, but investors should be aware that betting on this remains a speculation, not an investment.

The article Why Hewlett-Packard Shares Are Soaring Today originally appeared on Fool.com and is written by Alex Dumortier, CFA.