Why Has Kraft Foods Group Inc (KRFT) Stock Soared After Its Spinoff?

When shares of old Kraft stock broke into two components last fall, most investors expected the higher-growth Mondelez International Inc (NASDAQ:MDLZ) global snacks business to be the more attractive segment of the two post-spinoff companies. Yet the North American grocery business that now trades as Kraft Foods Group Inc (NASDAQ:KRFT) has shown surprising success as an independent company, and as it’s turned out, shares of the new Kraft stock have done a lot better than Mondelez during the first nine months of their separate existence. Let’s take a closer look at exactly how the new Kraft has done so well and what’s in store for its stock going forward.

The appeal of the food business
The old Kraft Foods Group Inc (NASDAQ:KRFT) was a monster food company, so it’s important to know which company got which brands in the spinoff. Mondelez kept its global snack-food business, which include brands like Nabisco, Cadbury, Oreo, and Trident. Meanwhile, Kraft got equally familiar grocery-store brands including Jell-O, Oscar Mayer, Velveeta, and Capri Sun, as well as its namesake Kraft lines of products such as macaroni and cheese.

The original reason for the split was to allow Mondelez International Inc (NASDAQ:MDLZ) to free itself from what was perceived as a mature, slow-growth grocery business. With North America having fewer high-growth prospects than international markets, especially in emerging markets, the new Kraft Foods Group Inc (NASDAQ:KRFT) was expected to lag behind while Mondelez could be more nimble in taking advantage of growth opportunities around the world.

But Mondelez has suffered some headwinds. In its most recent earnings report last month, Mondelez reported weakness in its coffee segment, forcing it to cut prices in Europe in order to stay competitive. Moreover, The Hershey Company (NYSE:HSY) has stepped up its presence in the lucrative emerging market regions, where Mondelez has enjoyed substantial revenue growth. In addition, the rise of private-label offerings from ConAgra Foods, Inc. (NYSE:CAG) as it works with grocery store chains to offer competing products to those Mondelez offers has hit the global snack company especially hard, given its many premium-priced snack offerings that especially lend themselves to private-label knockoffs.

Meanwhile, Kraft Foods Group Inc (NASDAQ:KRFT) has been the one to seek to breathe new life into some of its products. By converting its once-popular Kool-Aid from powder to liquid, Kraft is hoping to get new customers interested in the product as sales have been weak lately. Moreover, the company has reported 16% growth in its Velveeta sales, and other important brands, such as Miracle Whip and its Oscar Mayer packaged meat line, might well have similarly surprising potential.

Making shareholders happy
But what’s really pushed Kraft Foods Group Inc (NASDAQ:KRFT) stock higher has been its attention to shareholder-friendly initiatives. Understanding that revenue growth isn’t the only important factor for investors, Kraft has moved to make its business more efficient, cutting costs and reducing unnecessary bulk in its operations. By producing more free cash flow and generating greater returns on its invested capital, Kraft hopes to follow in the dividend-paying footsteps of the old company. 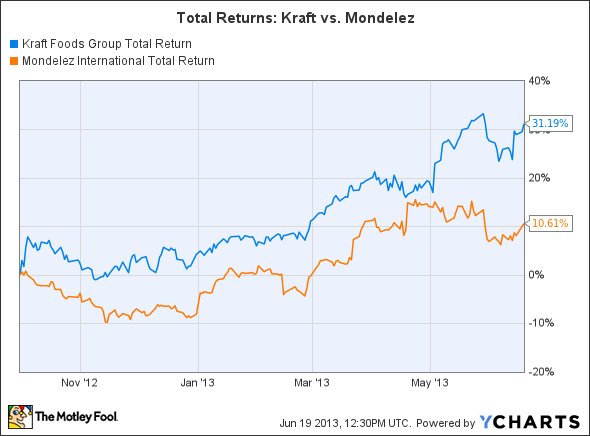