Why Facebook Inc (FB) Is Worth More Than $100 Billion

Shares jumped 30% in less than 24 hours, after Facebook announced revenue for the second quarter of 2013 was up 53%, taking market capitalization to $82 billion. This, however, may be just the beginning. As Facebook Inc (NASDAQ:FB) continues growing its revenue and user base, emphasizes mobile growth and experiences with different monetization models, I believe the biggest social network in the world will surpass $100 billion in market capitalization in less than a year. Here’s why I think so. 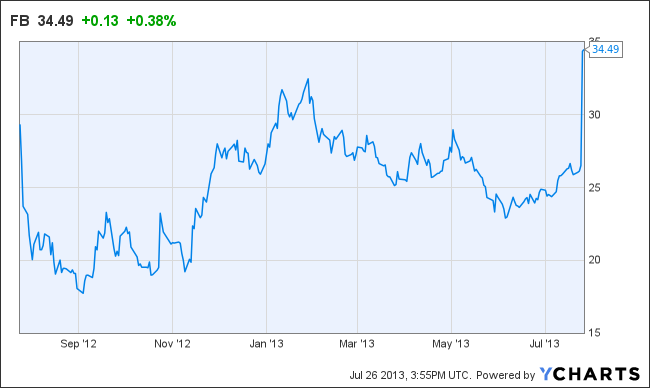 Mobile isn’t a threat for Facebook: it’s an opportunity

One of the reasons most investors were afraid of investing in Facebook Inc (NASDAQ:FB) was the increase in mobile traffic. As Facebook became a “mobile” application, many analysts predicted that advertisement revenue could fall below expectations since Facebook did not seem to have a clear idea on how to monetize its mobile application.

Luckily for Facebook, as more users log into their accounts from mobile platforms, the average amount of time they spend using Facebook also increases. This is because mobile users seem to be more engaged. The more time spent on Facebook, the more exposure to advertisements, and the more opportunities Facebook Inc (NASDAQ:FB) has to make money. That’s exactly what is happening now and what is driving revenue and income growth: the ratio of daily actives to monthly actives was 61% in the last quarter, and as high as 70% in the U.S. alone. In this way, investors and analysts regarded mobile as a negative catalyst, where in fact it is a positive catalyst.

As a matter of fact, not all IT companies can say mobile is good for their business. Facebook is the exception, not the rule. Even Google Inc (NASDAQ:GOOG) is finding mobile monetization hard.

The latest earnings call showed its cost-per-click fell by 6% compared to a year earlier (analysts were looking for a 3% drop) due to the increased usage of mobile phones and tablets. Most likely, Google Inc (NASDAQ:GOOG) will have to make it harder for the advertiser to choose only-PC ads, or enforce combined rates for PCs, tablets and mobiles. This could cause some initial disappointment among advertisers, and could be an opportunity for Facebook.

This is a historical milestone that should be reviewed in detail. Facebook recently reached more than 1 million advertisers, well-diversified in terms of geography, location and type of business. Considering that Facebook’s quarter revenue totaled $1.46 billion, roughly speaking, each advertiser spends $1460 per quarter (I’m assuming the only source of revenue is ads, for simplicity).

This is not the only growth driver, though. As I mentioned in an early note in my personal blog, US social media advertisement is set to explode in the next few years, and eventually other technologically savvy economies will follow the same trend. According to an interesting study by BIA/Kelsey, by 2017 $11 billion will be spent on social advertisements per year, which is $4.7 billion more than last year. Most of this growth will happen in the mobile arena, where Facebook’s users engagement is higher.

Even though social advertisement is still a young market that only represents 1% to 10% of ad budgets for most advertisers, Facebook managed to register 1 million advertisers. Imagine how this figure will look in the next few years. As more advertisers join social networks and as each average advertiser increases its social ads budget, Facebook revenue could double once more in less than a year.

Yes! If Facebook Inc (NASDAQ:FB) keeps a similar growth rate for the next 3 years, it will quadruple its revenue base per quarter with no difficulty, making a potential $5.84 billion per quarter. The percentage of revenue that is converted to income is roughly 23%, but as Facebook gets more advertisers under its network, it could add a moderate premium to improve margins or use bargaining power with its content delivery networks or infrastructure providers.

But Morningstar mentions that the average P/E ratio of this Industry is 36.8! Since Google Inc (NASDAQ:GOOG) is also an advertising company, if you assume the same P/E ratio for Facebook (27x), you obtain a $189 billion market capitalization.