Just 10 days ago, I examined the bear thesis on Spectrum Pharmaceuticals, Inc. (NASDAQ:SPPI) as, amazingly, over half of its float was sold short. It looks like those short sellers were on to something after all.

Spectrum Pharmaceuticals, Inc. (NASDAQ:SPPI) tonight announced a crushing 40% guidance reduction for 2013, setting a revenue target between $160 million to $180 million, compared to Wall Street’s roughly $300 million estimate. The stock is currently down nearly 40% in after-hours trading. The culprit is steeply lower Fusilev sales, a branded drug that took full advantage of generic leucovorin’s unavailability to rack up $204 million in 2012 sales. Short sellers saw this as just a temporary bonanza while bullish investors believed that Spectrum Pharmaceuticals, Inc. (NASDAQ:SPPI) could hold on to those market share gains.

The announcement is a dramatic change of tune from Feb. 21, when during Spectrum’s fourth-quarter conference call CEO Rajesh Shrotriya confidently declared, “We expect 2013 revenues to grow” on the back of strong January trends. I’m guessing February and March were trending worse than Seth MacFarlane’s Oscar performance.

Perhaps putting too much faith in management’s comments from the conference call, I concluded my video from earlier this month that while the growth days of Fusilev were over, generics weren’t poised to immediately decimate its market share. Oops. However, I did at least argue that, over the longer haul, short sellers would be vindicated, potentially sooner if insurance reimbursement pressure hastened the switch to lower-cost generics from companies such as Sagent Pharmaceuticals Inc (NASDAQ:SGNT) .

Spectrum Pharmaceuticals, Inc. (NASDAQ:SPPI)’s valuation may be shattered, but it doesn’t mean the stock is finished. Fusilev is still expected to bring in $85 million in 2013. Spectrum Pharmaceuticals, Inc. (NASDAQ:SPPI)also has two other drugs on the market, albeit neither are great sellers, a handful of phase 2 and phase 3 cancer assets, and about $60 million in net cash to help develop them.

Even for investors who believe in those late-stage assets, the valuation of this company is still murky given that Fusilev sales could decline worse than estimated. I recommend staying away from falling knife stocks, unless you like getting cut.

The article Why Bears Are Devouring Spectrum originally appeared on Fool.com and is written by David Williamson

David Williamson has no position in any stocks mentioned, and neither does The Motley Fool. Follow David on Twitter @MotleyDavid. 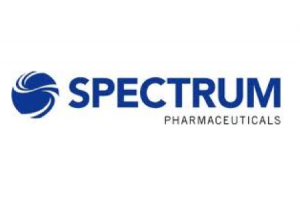