Why Bank of America Corp (BAC) Is Following the Crowd Today 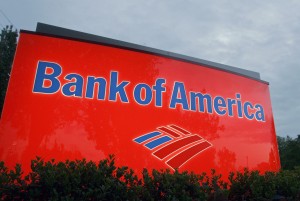 After taking early losses yesterday, Bank of America Corp (NYSE:BAC) and its compatriots largely recovered by the end of the day. Markets are still down this morning, with the bank following suit at a 0.6% decline at 10 a.m. EDT. Though there may still be some concerns about the overall market and international economies, some news closer to home may help the bank rise later in trading.

A look around the sector
Bank of America Corp (NYSE:BAC) isn’t the only one seeing red this morning, as its closest competitors continue to struggle toward breakeven as well:

Since weakness in international economies can have ripple effects across the globe, there are sure to be days when the banks feel the negative influence. But Bank of America Corp (NYSE:BAC) has diverse operations that will allow it to offset the small impact from Asian declines that may come in the near future.

Branches for sale
The newest headline for the bank this morning revolves around the continued effort to lighten its bank-branch load. B of A has already sold off more than 600 branches since CEO Brian Moynihan stepped into office in 2010. Now on the chopping block are 40 branches in rural New York and Pennsylvania. Though the talks with other banks to broker a sale aren’t public, this is another good move by the bank to reduce costs and unnecessary overhead.

The branches available are estimated to hold $1 billion in deposits, which could set the asking price between $20 and $30 million. Generally, branch sales include deposits, but Bank of America Corp (NYSE:BAC) would retain the loan accounts. This allows B of A to continue generating revenue through interest payments on the loans, while reducing its liabilities with the sale of the deposits.

Another day
Today is a tough one to figure out if you’re trying to determine whether the banks will rise by the end of the day. With larger forces at work on the market as a whole, the banks themselves might not be able to turn the tides back in their favor. But for long-term investors of Bank of America, today is a good day regardless of the share price’s moves. The bank continues to make decisions that will make it a lean, mean, banking machine — and strengthen its fundamentals.

The article Why Bank of America Is Following the Crowd Today originally appeared on Fool.com and is written by Jessica Alling.

Fool contributor Jessica Alling has no position in any stocks mentioned — you can contact her here. The Motley Fool owns shares of Bank of America, Citigroup, and JPMorgan Chase.