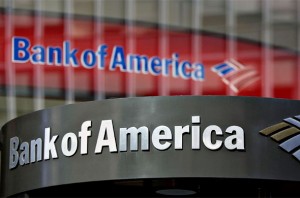 U.S. stocks achieved another record high yesterday, and they opened up again this morning, with the and the narrower, price-weighted up 0.3% each at 10:05 a.m. EDT. Buoyant stock markets are a global phenomenon: MSCI’s global index, which includes 45 countries, surpassed its June 2008 high today, while Germany’s DAX hit an all-time high.

For New York attorneys general, banks are the gift that keep on giving: They always provide an easy “win” for a politician who wants to burnish his populist credentials — never more so than in the wake of the credit crisis, when bankers have few friends. (Though, to be fair, banks have made themselves easy targets with their egregious behavior.)

Now, NY Attorney General Eric Schneiderman is going back to the well. He intends to sue and for violating rules regarding loan modifications. This is no longer a matter of transgressions that occurred during the frenzy of the credit and housing bubble or the pandemonium of the immediate crisis that followed; Schneiderman alleges that the organizations did not respect the terms of the $25 billion global settlement regulators finalized with banks in February 2012.

In principle, this is horrendous news for shareholders of the largest U.S. lenders, as it tends to reveal a specter of open-ended legal liabilities haunting banks. That uncertainty is one of the factors that explains how the shares of three of the four largest banks — Bank of America Corp (NYSE:BAC), and — continue to trade below their book values. However, a funny thing happened on the way to the market: The two banks fingered by Schneiderman aren’t getting hammered, as some had expected. Wells Fargo & Co (NYSE:WFC) is up moderately, while B of A has suffered a modest 0.4% loss.

This doesn’t mean a potential lawsuit isn’t bad news for these banks. While I’m always wary of interpreting short-term price movements, I think that as banks work through liabilities, the market is becoming accustomed to them. Furthermore, bank valuations had been so depressed that the costs, once known, turn out to be less daunting than the uncertainty investors associated with them. In other words, valuations had more than discounted these risks; consequently, shares don’t react negatively once the news is out. I believe the shares of these banks continue to offer investors a margin of safety.

The article Why Bank of America and Wells Fargo Aren’t Plummeting Today originally appeared on Fool.com and is written by Alex Dumortier, CFA.