Is anyone really surprised  the results of a Yale University survey showed most “green” behavior is more about saving money than the environment?

The survey showed half of Americans deliberately bought an energy efficient kitchen appliance with 75% intending to do so with their next purchase.

Of respondents surveyed 42% said they have bought organic food and 80% intend to do so (sure, if Whole Foods Market, Inc. (NASDAQ:WFM) happens to have a sale).

I have some qualms about the “intend to do so” category. I’ve been intending to clean out the garage for years and would tell a survey taker that with great conviction.

The survey found only one in ten actually did something like contacting an elected representative about global warming or climate change. Frankly, it’s surprising the number was that high.

It certainly looks good for Whirlpool Corporation (NYSE:WHR) and their energy-efficient appliances. The stock is up on good new home sales news. Its appliances are often featured in new homes and flippers like the brand to raise selling prices.

The stock is closely tied to housing as is its main competitor Electrolux as one can easily see from the chart. 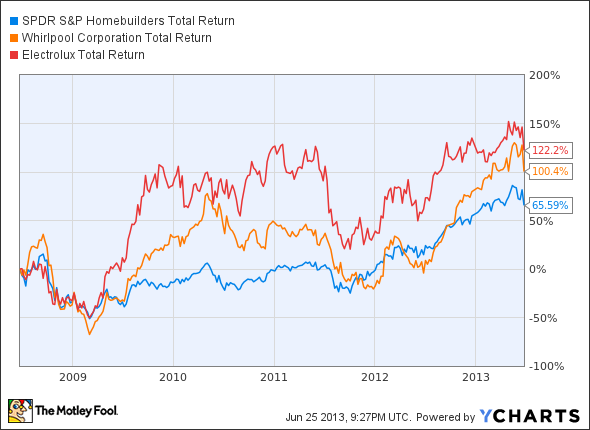 For the time being, Whirlpool Corporation (NYSE:WHR) looks good as long as interest rates hold steady or rise very slowly. In the Chairman’s Letter to Shareholders CEO Jeff Fettig wrote that 2103 looked promising with improved consumer discretionary spending, increasing housing starts, and best of all, an accelerating appliance replacement cycle. In other words all those people that kept their appliances going with duct tape and a wish and a prayer will be buying new.

The 115 year old company Michigan based company has an expanding international focus, especially in Latin America with record sales and operating profit (ex-Brazil due to currency devaluation). Fettig expects that penetrating underserved emerging markets will help bring operating margin up to 8% by 2014.

Note that even with Brazilian currency problems their Brastemp brand is the number one home appliance brand in Brazil. The leading market share is partly due to customization options which allow buyers to customize their appliance design by color and electrostatic stickers.

Speaking of cleaning out the garage, besides appliances Whirlpool Corporation (NYSE:WHR) also owns Garageworks, a sleek garage organization system for… people like me who intend to clean it out. And the company’s KitchenAid division of tabletop appliances and cookware has recently teamed up with Sodastream International Ltd (NASDAQ:SODA). I must admit my 20 year old KitchenAid mixer still works great.

Then there’s the second part of the survey about organic and local food. There are two companies that benefit from this established trend. The big player is the aforementioned Whole Foods Market, Inc. (NASDAQ:WFM), largest grocer of healthy and organic foods in the US. It is beginning to expand internationally in Canada and the UK giving it a total of 340 stores.

It is one of the most environmentally and socially responsible businesses around with fair trade and local sourcing, GMO labeling, and above average employee pay and benefits.

Whole Foods Market, Inc. (NASDAQ:WFM) is trying out a small-box concept itself in more exurban areas and also lower prices but analysts have been dismissive of that initiative.I think it will drive traffic to these cozier stores and Half Paycheck prices will bring  organic and local buyers but balk at the price.

Whole Foods Market, Inc. (NASDAQ:WFM)’ stock could be called Whole Paycheck stock as its forward P/E is now at 30.19 and its PEG at 1.95. A yield of 0.80% isn’t as enticing as their dark chocolate covered espresso beans, my personal downfall.

The stock has underperformed the S&P 500 with gains of 9.32%. The short interest at 2.10% has been rapidly rising from 4.86 million shares short in April to 7.65 million at the end of May. Whole Foods is also trading at more than five time book value. 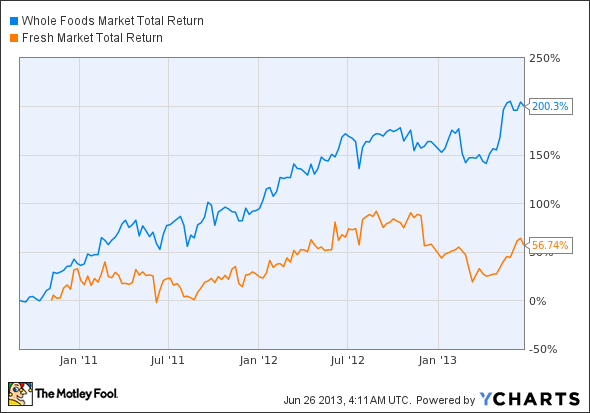