Consumers have increasingly been gobbling up organic foods, driving U.S. sales from $11 billion in 2004 to $27 billion in 2012. Organic food sales grew at an annual rate of 7.4% in 2012, more than double the growth rate for all food sales. Given that organics account for less than 5% of overall grocery sales, there’s still plenty of growth potential left.

Since going public in 1992, first-mover Whole Foods Market, Inc. (NASDAQ:WFM), the largest retailer of natural and organic foods in the US, has been a huge beneficiary of this ongoing trend. Not surprisingly, an increasing number of retailers have been entering this space or going public in order to get a (bigger) piece of the growing organic pie.

It can be hard to keep track of who’s on first. So, here’s an overview of the main organic and natural food retailers.

It’s often overlooked that Whole Foods Market, Inc. (NASDAQ:WFM) is also steadily becoming more of a food producer, as it offers a multitude of products under its “365” brand. A strong-selling private-label brand helps increase margins.

The Fresh Market Inc (NASDAQ:TFM), based in North Carolina, is a specialty retailer providing fresh, high-quality foods focused on perishables. It went public in late 2010.

The company had 131 stores in 25 states as of April 28. The bulk (about 100) of its stores are located in the South, with a heavy concentration in Florida. It has a smaller presence in the Midwest and Northeast, and 2 stores in California.

Natural Grocers by Vitamin Cottage Inc (NYSE:NGVC), based in Colorado, is a family-operated specialty retailer of natural and organic foods and dietary supplements. It went public in July 2012.

The company has 70 stores in 13 states. Stores are concentrated in the Midwest, Mountain States, and West. It opened 13 stores in fiscal 2013, and already has plans to open at least 11 in fiscal 2014.

Sprouts Farmers Market Inc (NASDAQ:SFM), based in Phoenix, AZ, is a retailer of natural and organic foods. It just went public on Aug. 1, with its stock price quickly doubling, likely suggesting both organic food is an attractive space and the market’s over-heated.

It had 160 stores in eight states as of July 6. Stores are concentrated in the Mountain States, Southwest, Oklahoma, and Texas. It will open 19 stores this year and plans to open 20 stores in 2014.

How do the players stack up by the numbers? 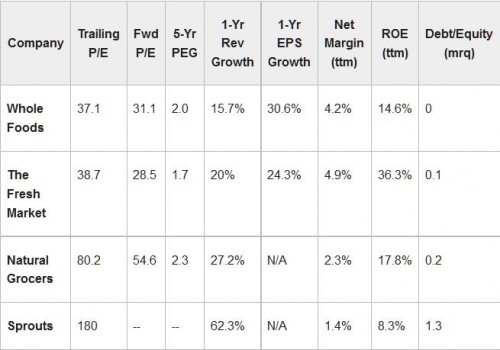 Whole Foods reported fiscal third quarter results on July 31. It had a solid quarter, with revenue and EPS up 12.1% and 20.2%, respectively. Comparable store sales were up 7.5%, which is tops in this industry, yet down from 8.2% in the prior-year quarter.

It upped EPS guidance for 2013 and now expects EPS growth of 17% to 18% on sales growth of about 13%. Analysts’ estimates are for 18.9% average EPS growth over the next five years.

Some analysts think margins could be hurt in the future due to the company’s competitive pricing strategy implemented to gain market share. While that’s a legitimate concern, it will prove to be a good decision if the increased sales add more to the bottom line than contracted margins subtract from it.

The Fresh Market Inc (NASDAQ:TFM)’s revenue and EPS rose 12.9% and 14.8%, respectively, and comparable store sales rose 3% in its first quarter ending April 29. It reports second quarter results on Aug. 28. Analysts expect EPS growth of 21% next year and an average of 20.4% over the next five years.

Natural Grocers by Vitamin Cottage Inc (NYSE:NGVC) revenue and net income rose 30.5% and 31.1%, respectively, in its fiscal third quarter ending June 30. This isn’t an apples-to-apples comparison with the prior year’s quarter, as the company purchased a 45% non-controlling interest in Boulder Vitamin Cottage (which owns five stores in Colorado) in July 2012. On a pro-forma basis (as if the company owned the remaining interest since the start of 2012), net income increased 19.5%. Comparable store sales rose 10.4%. Analysts expect EPS growth of 87% this year, 28% next year, and an average of 26.5% over the next five years.

Natural Grocers by Vitamin Cottage Inc (NYSE:NGVC) is a mixed bag — great comparables and strong growth expected, but margins and valuation are drawbacks. Additionally, it had negative FCF over the trailing twelve months. Granted, it’s using the cash for expansion, but it’s still a drawback when compared to Whole Foods and The Fresh Market, which fully funded their expansions with cash from operations. I’d wait a quarter or two to see which direction things move.

Organic food sales are projected to grow at about an 8% annual clip for at least the next five years. That growth rate increases if the more ambiguous “natural” and “healthy” foods are included.

Investors wanting to add a retailer specializing in this niche to their cart should consider Whole Foods. It has great margins and comparable store sales, and, while growth rates have slowed, they’re still strong. The Fresh Market and Natural Grocers, in that order, also bear watching.

The article Organic & Natural Food Retailers: How Do The Players Stack Up? originally appeared on Fool.com and is written by BA McKenna.