Who Is Going to Win: E-commerce or Department Stores? Nordstrom, Inc. (JWN) and More

The advent of the internet, which facilitated the rise of ecommerce, was one of the most significant moments in the evolution of the retail industry along with Sam Walton starting a little store in Rogers, Arkansas called “Wal-Mart Discount City” in 1962 and the emergence of “big box” retailing in the late 1970’s. Although the rise of the internet during the tech bubble forced many retailers to dip their toes into the world of e-commerce, it wasn’t until the last few years that many dedicated enough resources to the channel to actually make it a meaningful part of their business. Now that the shift into e-commerce is being fully embraced as a sales medium, we may have reached the point where the industry has no choice but to proactively rationalize its store base. If it doesn’t, it could risk a severe deterioration of profitability in the next down cycle when four wall productivity may take another dramatic hit as it did in ‘08-‘09.

That said, a decline in store productivity due to the growth of e-commerce is inevitable over the indefinite future, particularly for the department stores. E-commerce has already contributed to a decline in store productivity over the last several years and the Street expects only two department stores, Nordstrom, Inc. (NYSE:JWN) and Macy’s, Inc. (NYSE:M) to have higher productivity on a unit basis in 2012 compared to 2007. The mass merchant space has been slower to adapt to e-commerce and as a result, all three are expected to have slightly higher productivity per unit in 2012 compared to 2007.

Other struggling retailers such as Kohl’s Corporation (NYSE:KSS) may also need to reassess their store base if sales remain weak, an event that could serve as a tipping point for another round of rationalization in the sector. From a real estate perspective, although little new supply is being added, the situation is likely to get worse before it gets better, particularly for lower quality “C/D” locations.

The following chart shows that only Nordstrom and Macy’s had higher productivity in 2012 as compared to 2007 on a unit basis. 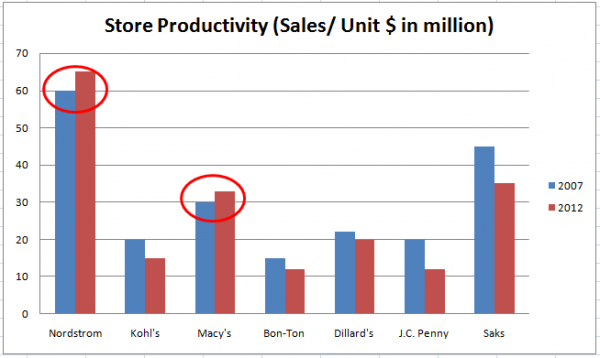 Recently, Kohl’s surprised the market by posting 13.3% gain in same-store-sales (SSS) reported on the 7th of this month. The company claimed that the sales boost was seen in all segments of the company. However, only the footwear segment failed to post a double-digit comparable sales growth figure. However, the comments about the stock have been confusing in the market. On one hand, some experts call this stock a perfect buyout package given its strong cash flows and attractive brands. However, on a contrary, there are instances like Kohl’s being dropped off the list of visible companies prepared through Harris Interactive’s 2013 Reputation Quotient survey.

Nordstrom displayed a SSS gain of 11.4% which was higher than the Street’s estimate of 6%. Total sales were also 40% higher YoY. Recently, the company’s omni-channel approach has been popular in the market. The company was lately criticized for its YoY fall in margins in the last quarter. However, the rise in store productivity for Nordstrom has sent bullish signals to the market.

A Slowdown at Wal-Mart Stores, Inc. (WMT) Is a Warning Sign for Retail Stocks...