Sears Holdings Corporation (NASDAQ:SHLD) is one of the largest retailers in the U.S. with over 2,000 stores under its Sears and Kmart brands, and another 500 stores in Canada.  Sears has been a stock that has disappointed me for some time now, as revenues keep falling (see below) and the company has not quite figured out a way to turn things around yet.  With the company set to report year-end earnings Feb 28, is a turnaround finally on the horizon, or are more declines coming soon? 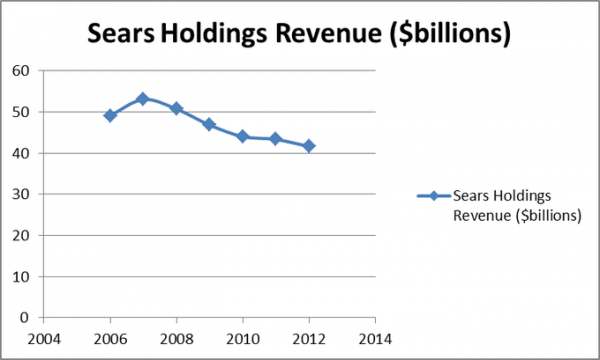 Sears has tried all kinds of techniques to build up their business, such as their Shop Your Way Rewards and layaway programs.  The Shop Your Way Rewards program works sort of like a frequent-flyer program, where shoppers earn points for their purchases that will earn them future discounts.

Another technique Sears has used to try to make more efficient use of their space is to lease space within their existing stores, such as having an outside business operate a garden department adjacent to the store, or using inside space to create a “store-in-store” setup.  For example, Western Athletic Clubs opened a health club in a Sears in Cupertino, California.  There is also a specialty grocery store in a Kmart in San Diego.

While the company has maintained an online presence for several years, they are now attempting to compete with Amazon.com, Inc. (NASDAQ:AMZN) by offering third parties access to sell items through their website through Sears Commerce Services.  In my personal opinion, this is a severe misallocation of Sears Holdings’ resources.  This is akin to opening a small electronics retailer next to a long established Best Buy and selling the same products for more money.

Sears just does not have the resources to compete with a giant like this.  Even for items that Sears is known for, such as appliances, Amazon simply has the economies of scale and low overhead needed to undercut anyone else.  For example, I need a new washing machine.  A quick search on Sears reveals that their most popular model is the LG model WM3470HWA which they sell for $1099.99.  I can either pay $69.99 to have it delivered or pick up in store for free.  A few clicks of the mouse later on Amazon and I can have the exact same model for $50 less plus free delivery, saving me a total of $120.

Sorry to rant so long about Amazon.  Sears is not the first company to make fruitless attempts to compete with Amazon and certainly will not be the last.  The bottom line: If you are bullish on online retail, Amazon is the only winner in this sector (aside from very specialized retailers that sell unique products); however I don’t like Amazon as an investment.  I have written several times about how overvalued Amazon is and how its current value is not sustainable, despite them being the best at what they do.

Sears Holdings’ CEO Lou D’Ambrosio recently stepped down, and Chairman of the Board Edward Lampert took over.  I view this as added uncertainty.  The turnaround finally began to gain traction in fiscal year 2013, which just ended January 31, with closures of over 100 underperforming stores and the spinoff of the Sears Outlet business.  I think the leadership change amplifies the already high level of risk here.

Sears Holdings is not profitable right now, nor are they forecast to return to profitability anytime soon, which makes a usual valuation analysis meaningless.  The company lost $4.69 per share for fiscal year 2012 and is projected to announce losses of $2.28 for FY 2013.  Looking forward, the consensus calls for losses of $3.31 and $2.33 per share in 2014 and 2015, respectively.  With numbers like these, Sears works as a purely speculative play.