America is dealing with high unemployment and a nasty economy, but North Dakota is walking down a different path. The development and growth of the Bakken formation has given a major boost to the state’s crude oil production and super-charged its economy. There are a different ways to invest in this growth story, and a number of small oil firms offer good exposure to the formation. 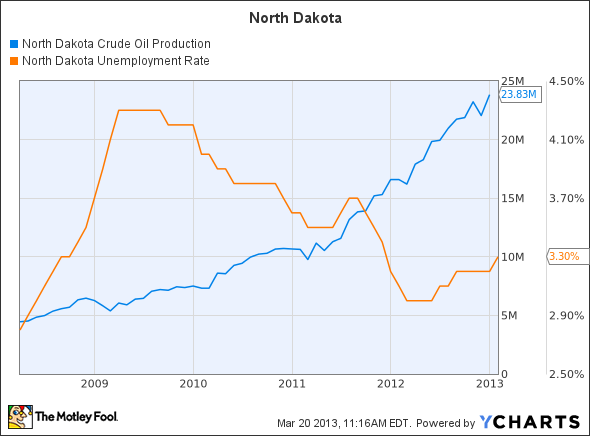 Invest in the Small Firms

Based on the daily crude oil production figures from December 2012, Whiting Petroleum Corp (NYSE:WLL) is the top producer in North Dakota’s Bakken field. Overall, the majority of the firm’s production is found within the Rocky Mountain region.

Michigan and the Gulf Coast together only produced 4 million barrels of oil equivalent per day (MBOE/D) compared to 63 MBOE/D in the Rocky Mountain region during Q4, 2012. These numbers show just how heavily Whiting Petroleum Corp (NYSE:WLL) is exposed to the Bakken formation.

The firm has a number of positive aspects. One of its major strengths is the fact that approximately 80% of its proven reserves are crude oil. This means that as the firm continues to develop its assets, it will  benefit from strong crude prices, while low natural gas prices will only have a minor effect. Also, as pipelines and railways are developed, the price the firm receives for its oil will continue to increase.

The firm’s total debt to equity ratio of 0.52 is not excessive. The company is growing and a healthy amount of debt helps to finance growth and take advantage of the historically low interest rates. Whiting Petroleum Corp (NYSE:WLL)’s return on investment of 7.9% is not amazing, but it’s cash flow positive, with a profit margin of 19.1%. Overall, the company is a good growth story.

Continental Resources, Inc. (NYSE:CLR) is another large producer in the Bakken formation. In Q4, 2012 it posted a production rate of 68 MBOE/D in this area. The firm’s work is not over yet. It plans to bring production to 300 MBOE/D in 2017, from 98 MBOE/D in 2012. The company continues to try and save costs. It has started to drill multiple wells from a single pad to increase profits and synergies. Recent data shows that $7.5 million can be saved by using a six-well pad rather than six single wells.