Whirlpool Corporation (NYSE:WHR) has managed to beat earnings in each of the last three quarters. The story was more of the same when the appliance maker posted EPS of $3.12, compared to $1.17 during the same period last year. Whirlpool tumbled to close to $20 per share at the height of the real estate downturn, but now the stock is back above pre-crisis levels. Is there still room for this stock to move higher? 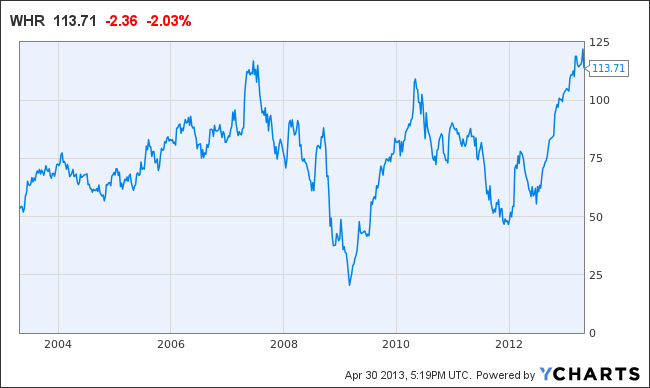 For the full year 2013, Whirlpool Corporation (NYSE:WHR) expects to report earnings per share of $9.80-$10.30, and the company has targeted an 8% operating margin by 2014. To help reach this 8% margin, Whirlpool has implemented cost-based price increases, while also targeting various cost-reduction measures. The goal appears achievable, especially considering the company’s operating margin reached 7% during 4Q 2012.

Whirlpool Corporation (NYSE:WHR) makes and markets home appliances and is an industry leader. The company ranks in the top five in market share in the four major appliance categories (refrigerators, microwaves, washing machines, and air conditioners). Whirlpool is the world’s largest home-appliances manufacturer, ahead of other appliance makers that include Electrolux, LG, Samsung, Siemens AG (ADR) (NYSE:SI) and General Electric Company (NYSE:GE).
Tally up Whirlpool Corporation (NYSE:WHR)’s appliance market share, including washers, dryers, refrigerators, freezers, dishwashers, ranges and compactors, and the company is ranked first in North America and Latin America, second in India, and third in Europe.

GE sells and services various major home appliances including refrigerators, freezers, electric and gas ranges, cook tops, dishwashers, clothes washers and dryers, microwave ovens, room air conditioners, and residential water systems. However, unlike Whirlpool, which is heavily exposed to the appliance industry, GE only generates 5.5% of revenues from its appliance segment. Although this can be bad news for Whirlpool Corporation (NYSE:WHR) in extreme slowdowns in the appliance market, being a pure play on the appliance industry makes Whirlpool a top pick in a rebounding economy.

General Electric Company (NYSE:GE) has been focusing on its industrial business lines and downsizing its non-core businesses, which include its exit from the media business. One of the major benefits for GE is its robust international presence; more than 50% of the company’s revenues are from emerging markets.

Siemens AG (ADR) (NYSE:SI) is another diversified products company, like GE. The company operates various segments, and buried in its product portfolio is an affiliate, BSH Bosch, which offers a complete range of household appliances. This joint venture with Bosch is the world’s third largest leading manufacturer of high-end appliances, selling under the brands Bosch, Thermador and Gaggenau.

The keys for Siemens is it is a leader in industrial automation, power generation, medical equipment and transportation. This puts the company in a solid position for growth on the back of increased spending as developing nations build up their infrastructure. Siemens’ 2014 program is targeted at sustainable value creation, which includes the primary target of raising its total sector profit to at least 12% by fiscal 2014. Income from continuing operations during the first year of implementation is expected to be in the range from $4.5 billion to $5.0 billion.