General Electric Company (GE) is viewed as one of the top players among diversified-industrial stocks. With the ability to sustain and implement its balanced capital allocation plan, its strong cash position enabled it to repurchase $1.9 billion worth of shares during Q1. Along with dividends, General Electric returned $3.9 billion to shareholders during the quarter. 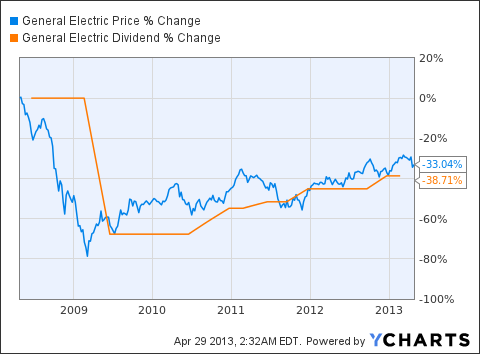 At present, General Electric Company (NYSE:GE) offers a quarterly dividend of $0.19 per share. After a whopping dividend cut in 2009, GE offers a consistently increasing dividend, which is growing at a high rate. In the last year alone, GE raised its dividends by approximately 11.8%. Similarly, after a whopping 80% decline in price, the stock is regaining its momentum and has appreciated nearly 81.8% in the same period.

In this article, I will try to draw a conclusion on the company’s ability to sustain shareholder returns. To do that, I looked at the industry segments to see where General Electric Company (NYSE:GE) stands. I also looked at its recent results and strategic priorities to analyze its profitability in the current economic situation.

Sales and earnings were predicted to keep moving forward at the start of 2013, particularly in U.S. markets, while European markets continue to be challenging. The forward growth builds on more positive results when compared to last year. This signifies that sales and earnings are not being suppressed by the existing slow-growth environment. After positive Q1 results, companies like 3M Co (NYSE:MMM) and Emerson Electric Co. (NYSE:EMR) have raised their projected earnings per share.

3M Co (NYSE:MMM) is solid stock for both value and dividend investors. Over the year, its price has appreciated 18%. In addition, recently it increased its dividend by 8%. I believe its cost-cutting measures, ongoing restructuring program, and a continued share-repurchase program enable it to increase shareholder value.

On the other hand, Emerson Electric Co. (NYSE:EMR) is also a safe pick for both value and dividend investors. In the past five years, it has enlarged its dividend by about 36.7%. Additionally, the stock is also trading at a discount. It has a diversified revenue base and the ability to produce strong cash flows. I think Emerson can be a safe pick for long-term investors with its solid dividends and steady price appreciation.

General Electric Company (NYSE:GE) offers a variety of services all over the world and has a vast revenue base globally; in fact, it operates in seven business segments. Recently, the company announced Q1 results. It has shown growth in the U.S., while the European market continues to be troubled. In addition, GE’s power and water segment had experienced negative growth of 27%.

This is notable because the power and water segment is the company’s largest revenue-generating segment. In Q1, the European markets were worse than anticipated. This weakness also had a negative impact on margins. The first half of the year is expected to remain difficult in the European markets. However, this trend is expected to shift in the second half of the year.

The other six segments were inline with expectations. General Electric Company (NYSE:GE) saw solid growth in transportation and home and business solutions, aviation, and, excluding the impact of foreign exchange (FX), there was growth in oil and gas. On the whole, the remaining six business segments grew profits by 6%, with 40-basis points of margin growth. On a consolidated basis, operating earnings stood at $4.1 billion, up 14% compared to the 2012 Q1.