One stock that didn’t help the Dow today was Exxon Mobil Corporation (NYSE:XOM), which was down 0.10%. It seems losing days have become a bit of a habit for this stock recently, if we are to believe the following tweet from the folks at Bespoke Investment Group (@bespokeinvest):

That seems like an unlikely result, if chance were the only variable. Indeed, if we assume that the odds of Exxon Mobil Corporation (NYSE:XOM)’s stock being up or down on any given day is 50:50 and that each trading day represents an independent trial, then the probability of recording 19 losing days out of 20 is .0019% (or stated differently, approximately 2 in 100,000.)

That result strongly suggests that Exxon Mobil Corporation (NYSE:XOM)’s daily returns are not independent of one another right now and that there is some sort of momentum effect at work — negative momentum, in this case.

Which raises the question: Is there anything going on with Exxon Mobil Corporation (NYSE:XOM)? I’m not talking here about the stock directly — barring an obvious catalyst, trying to divine the reason behind short-term price movements is a fool’s errand. Rather, the stock’s losing streak is the opportunity to ask a more fundamental question: Is Exxon Mobil Corporation (NYSE:XOM)’s franchise and hence its business value deteriorating?

If we go by the second-quarter “action” of investors who actually have a view on the stock’s intrinsic value, the answer to that question appears to be no. Second-quarter portfolio transactions by the 53 value-oriented managers/ funds tracked by gurufocus.com reveal four (three of which are affiliated with Yacktman funds) increased their positions during that period, with four reducing them. In each case, the relative size of the purchases and sales was essentially insignificant; in particular, all sales represented less than half a percent of the position at the end of the first quarter.

However, as the Financial Times recently remarked [subscription required]:

[Oil] majors seem trapped in a downward cycle of spending more and more to find and produce less and less oil. Increasingly, investors are ditching them for smaller, more nimble rivals, especially those in the vanguard of North American shale.

That would certainly help to explain the shares’ massive underperformance this year: 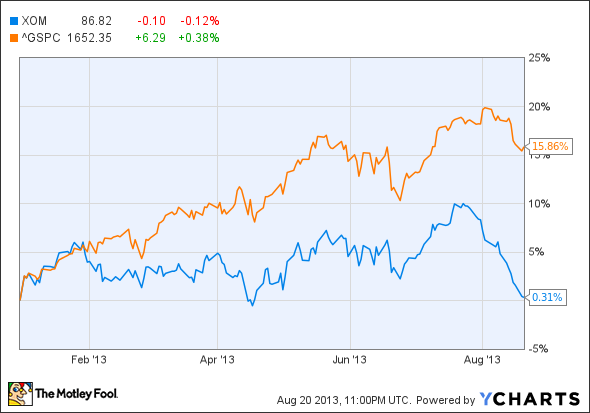 Either way, as Exxon Mobil Corporation (NYSE:XOM) (along with the other majors) shifts focus from trying to maximize production volumes to managing for value, investors who can wait out this period of underperformance can expect to be reap a reasonable return in exchange for their patience.

The article What’s Wrong With ExxonMobil? originally appeared on Fool.com and is written by Alex Dumortier, CFA.

Fool contributor Alex Dumortier, CFA has no position in any stocks mentioned, and neither does The Motley Fool.