Shares of Costco Wholesale Corporation (NASDAQ:COST) hit an all-time high last Friday, ahead of next week’s third-quarter earnings report. Costco Wholesale Corporation (NASDAQ:COST) stock has been a very consistent long-term winner for shareholders. Over the last 10 years, it has moved steadily higher, aside from a dip caused by the Great Recession. 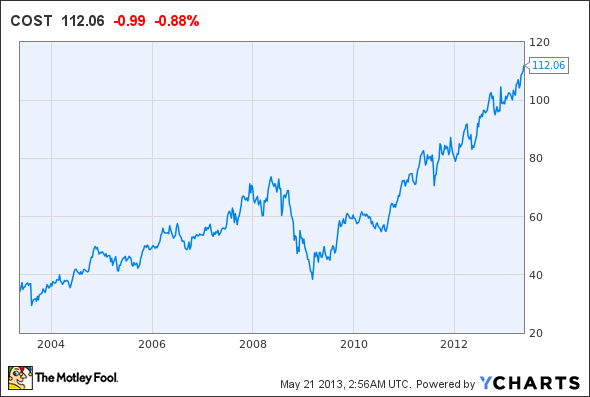 Costco stock trades at 25 times earnings, so it’s not exactly cheap. However, the company is still probably one of the best investments out there, because it has a powerful business model that engenders strong customer loyalty, and there is plenty of room for long-term growth.

The power of Costco
There are essentially two reasons that Costco Wholesale Corporation (NASDAQ:COST) stock has performed so well over the years. First, the company is very efficient. For example, Costco ended last quarter with inventory of just $7.6 billion, which is less than a month’s worth of sales. Furthermore, this is almost entirely financed by vendors, which minimizes working capital requirements. In other words, by the time Costco has to pay its suppliers, it has already sold most of the relevant inventory. This reduces costs and allows Costco to maintain a very steady gross margin rate.

Second, Costco has the lowest operating expenses in the business, due to a focus on reducing costs and “investing in price” — i.e., lowering prices in order to drive more traffic. Last year, Costco Wholesale Corporation (NASDAQ:COST) had operating expenses of just $9.5 billion, or 9.6% of sales. By contrast, operating expenses at Amazon.com, Inc. (NASDAQ:AMZN), which is generally considered a very efficient retailer, totaled 23.6% of sales.

Costco’s rock-bottom operating expenses give it the ability to match or beat the prices of all its competitors. This is good news for those who own Costco Wholesale Corporation (NASDAQ:COST) stock, because it means that the company should not be vulnerable to disruption by online competitors. Shareholders can be reasonably confident that Costco’s industry-leading prices will be as big an attraction in 10 or 20 years as they are today.

Growth prospects
Costco is not a high-growth company anymore; revenue is growing in the high single digits, with earnings growing slightly faster. The logistical challenges of finding appropriate real estate, securing the necessary permits, and building new warehouses put a cap on growth, for all practical purposes. Costco plans to open approximately 30 new warehouses per year for the next few years, which implies 4% to 5% annual growth in square footage.

However, while Costco Wholesale Corporation (NASDAQ:COST)’s growth rate is modest compared to that of Amazon.com, Inc. (NASDAQ:AMZN), it is probably sustainable for a long time. This can justify Costco stock’s relatively high multiple compared to that of most of its retail peers. As of February, Costco operated 622 warehouses, of which more than 90% are located in North America.