Cummins Inc. (NYSE:CMI) is still facing pressure from a struggling economy, expecting to see full year 2013 revenues come in flat to down 5% year over year. However, as the economy rebounds, Cummins Inc. (NYSE:CMI) should perform nicely, which will also be spurred by increased demand for fuel economy improvements and new emission standards.

Its engine segment is its bread and butter, accounting for over 50% of sales. The segment produces engines and parts in the on-highway and industrial markets. Its engines are used in trucks of all sizes, buses and recreational vehicles. However, Cummins has managed to underperform the S&P 500 over the past twelve months. 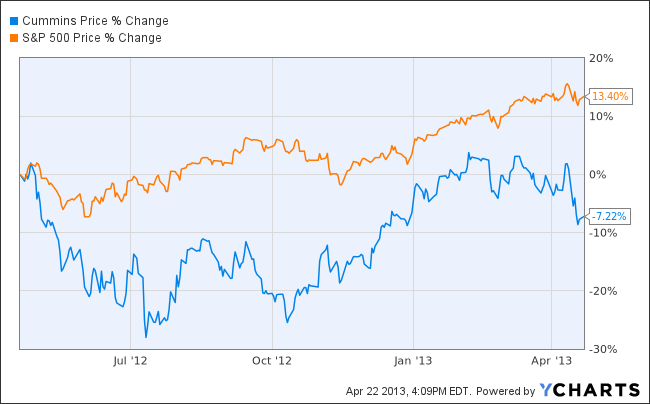 This downturn has been in part due to weak performance. The company showed a 21.9% fall in earnings last quarter on a year over year basis, thanks in large part to lower revenues. For full year 2012, Cummins Inc. (NYSE:CMI) reported a 5.1% decrease in net income per share to $8.61.

However, the company has still managed to beat analysts’ EPS estimates in each of the last four quarters. Analysts are also encouraged by the company’s future prospects, with the company expected to grow EPS at an annualized 9.6% over the next five years.

Another big encouragement is how excited hedge funds are about the stock. Going into 2013 there were a total of 39 hedge funds long the stock, which was up 30% from the third quarter. This include a variety of notable managers, including Columbus Circle Investors, Adage Capital Management and billionaire Ken Griffin’s Citadel Investment Group.

Navistar International Corp (NYSE:NAV) is a manufacturer of International brand commercial and military trucks. The company has been improving but still has its struggles. It posted a loss of $1.42 per share in the first quarter of fiscal 2013 compared to the $2.06 loss in the prior-year quarter.

Revenues from Navistar International Corp (NYSE:NAV)’s largest segment, trucks, fell some 20% last quarter year over year. As well, its engine segment was down 13.9%. Navistar also only had $500 million in cash at the end of January 2013, with total debt upwards of $4.5 billion.

A big plus for Cummins was Navistar’s abandonment of its decade-long Class 8 diesel truck engine strategy in 2012, which forced the company to turn to Cummins Inc. (NYSE:CMI) for a viable solution. Navistar had been bullish about its exhaust gas recirculation project, which it had invested around $700 million in development costs since 2001. However, the truck engines failed to meet EPA standards, whereas Cummins uses selective-catalytic reduction, so Navistar International Corp (NYSE:NAV) now plans to combine its 13-liter MaxxForce engines with Cummins’ aftertreatment.

This further puts Cummins in the driver’s seat with respect to diesel engine market share, where the company owns nearly 40% of the heavy-duty truck-engine market share. What’s more, Navistar has a joint venture with Caterpillar Inc. (NYSE:CAT) to produce dump trucks and other trucks, with Caterpillar dealers also already selling Navistar-built trucks in overseas markets.

Caterpillar Inc. (NYSE:CAT) has seen of the worst pressure from the economic slowdown: 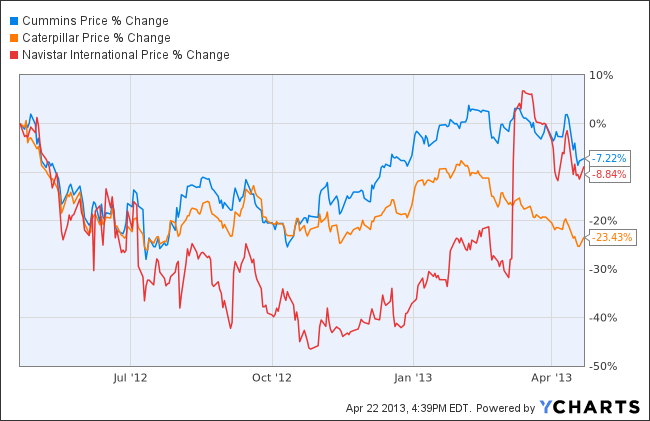