Tesla Motors Inc (NASDAQ:TSLA) has had a meteoric rise in 2013, driven by a surprise profit in the first quarter. This rise has brought the company’s market cap to $11.8 billion; lofty considering the fact Tesla only makes about 20,000 vehicles per year. 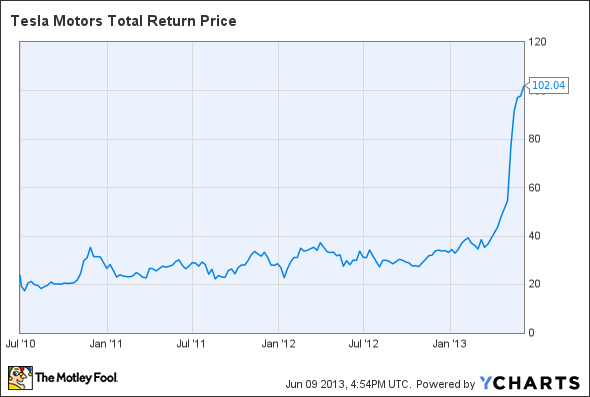 So, has Tesla Motors Inc (NASDAQ:TSLA) driven too far too fast or is there still value in the stock?

What is Tesla worth?

To get a ballpark idea of what Tesla Motors Inc (NASDAQ:TSLA) could be worth we need to look at production plans and eventual profits. It plans to sell 20,000 Model S sedans, and when the Model X begins production next year there may be another 15,000 vehicles produced. If we assume the average Model S sells for about $75,000, and that the Model X will sell for about the same, and that Tesla Motors Inc (NASDAQ:TSLA) can generate the 25% gross margin Elon Musk predicts, then the company could generate a $656 million profit.

That’s probably a generous estimate but it gives us a ballpark of how much money the company could make. Of course, it could add production beyond that in coming years and it will get revenue from partnerships with Toyota Motor Corporation (ADR) (NYSE:TM) and Mercedes-Benz, but this is what we know of so far.

Many unknowns for Tesla

The challenge for investors is trying to predict how many vehicles Tesla Motors Inc (NASDAQ:TSLA) will make in the long term, how much profit it can command, and how its competition will react. Tesla is making a decent number of vehicles, but Ford Motor Company (NYSE:F) and General Motors Company (NYSE:GM) will react to its success and have much larger balance sheets and networks. Tesla could possibly make 35,000 vehicles per year by 2015, but just last month Ford Motor Company (NYSE:F) and General Motors Company (NYSE:GM) sold 246,585 and 252,894 vehicles in the U.S. alone. Despite the fact that they make 10 times more vehicles in one month than what Tesla makes in a year, Tesla has a quarter the market cap of GM and under one-sixth the value of Ford.

Tesla could generate $656 million in profit based on the assumptions I’ve made above. But even if it does, the company would only generate net income of about $400 million after research and development, operating costs, and taxes. So, the stock would trade at 30 times earnings right now. I think a fair valuation given the long lead time in expanding production would be half that multiple, or a stock price of around $50. Unless the company plans to grow capacity by more than planned there’s just not a lot of value in the stock right now.

The article What Is Tesla Motors Really Worth? originally appeared on Fool.com and is written by Travis Hoium.