What Yahoo! Inc. (YHOO) Bought With Tumblr Is Team 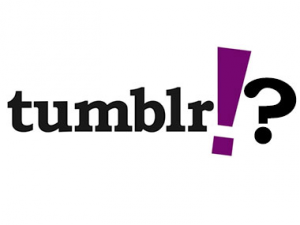 The Yahoo! Inc. (NASDAQ:YHOO) acquisition of Tumblr came about very quickly, and was closed over a weekend, at $1.1 billion.

All the analysis I’ve seen on the deal focuses on what it means for users. Is Yahoo!! cool enough to keep them? Will they abandon Yahoo! for, say, WordPress? How fast will Yahoo! Inc. (NASDAQ:YHOO) try to get its money out with advertising, and how much will that annoy users?

All this misses the point of what Mayer has been trying to do at Yahoo! Inc. (NASDAQ:YHOO), and why she was so aggressive in bidding $1.1 billion against no one in order to close the deal.

Some of that is summed up in a Tumblr offering Mayer delivered right after the deal closed, on a new Tumblr page she had set up just that morning. It’s a dueling set of head shots, her and Tumblr founder David Karp, with hers saying “WFH” and his saying “NSFW.”

WFH stands for “work from home,” and so far that’s what she is known for, her prohibition against the current staff working off-site. NSFW means “not safe for work,” and is a common reference to content that is racy, off-topic, or that the boss may not like.

This was posted shortly after her own announcement, on the same page, of the deal, promising not to “screw it up.”

It’s all an effort to focus on the team, on the supply side of software creativity. Tumblr has it. The team Mayer inherited did not. That’s why she brought them into the office, to see who has game and who doesn’t. And that’s why she bought Tumblr, to inject some of that fighting spirit into her tech people.

What Google and to a lesser extent Facebook Inc (NASDAQ:FB), both of them rumored Tumblr bidders, neither of which actual Tumblr bidders, have in common is their approach to development. It’s about speed, about creativity, about getting new things out the door and worrying about what they mean later.

Yahoo!, after a decade spent as a “media company” rather than a tech outfit, didn’t have that any more. That “everyone is in charge” attitude you see with Google’s “20% time” or Facebook Inc (NASDAQ:FB)’s hack-a-thons had disappeared from Yahoo!. The key to being competitive is getting that back.

A lot of people find Facebook Inc (NASDAQ:FB) CEO Mark Zuckerberg annoying, but his employees give him very high marks and that’s important. Building a team that will run through walls for you is the key to making your name in today’s computing world. Zuckerberg has that, Google’s Larry Page has that, and that’s what Mayer has to build if she’s to be competitive.

With the rise of cloud computing, a lot of companies have built this “mission-focused” attitude into their tech staffs. This is why VMware held its press conferenc introducing the Pivotal Initiative inside its offices. Those who joined the podcast noticed a line of desks behind the participants, where programmers were busy coding, chatting with one another, or going for water. There was a message there – we care for the mission.

What Mayer is hoping is, not that she just took over Tumblr, but that Tumblr just took over Yahoo! Inc. (NASDAQ:YHOO). A mission-oriented, skunk works, start-up attitude is what is needed to compete in 2013, and Yahoo! now has that.

It’s possible that Wall Street understands this necessity. The company’s stock rose after the news, adding almost $200 million to the market cap, even though most pros thought it would go down.