However, Research In Motion Ltd (NASDAQ:BBRY) got back into the game this year, officially unveiling the Z10 and Q10 smartphones on Jan. 30. Anticipation of that launch event drove BlackBerry’s stock up from its September low of $6.22 to more than $18. 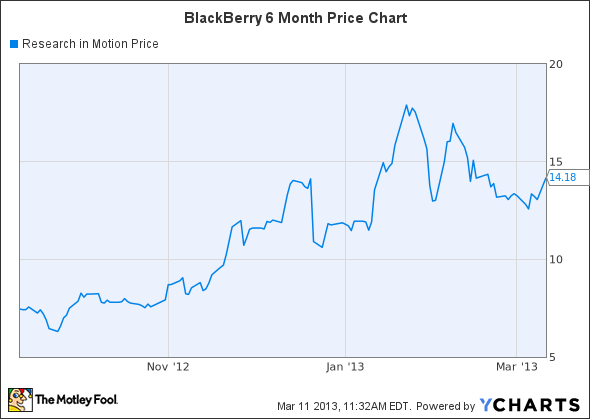 Since then, the stock has receded somewhat amid renewed debate over the platform’s likely success and competing views on initial sales trends. Investors will get some early insight into BlackBerry’s trajectory when the company reports earnings in two weeks. Here’s what you should look for.

Z10 Sales
BlackBerry’s all-touch Z10 smartphone went on sale in the U.K. the day after the launch event, and has since gone on sale in Canada and a number of smaller BlackBerry markets. (U.S. sales are expected to begin later this month.) There is a great deal of uncertainty about early Z10 sales trends. Analysts have been throwing out very low sales estimates — typically under 1 million units — for Q4, which covers the first month or so of shipments. Anything greater than 1 million units sold last quarter would be a very strong result, while a total less than 500,000 would be somewhat troubling.

However, early Z10 sales figures will not tell the whole Research In Motion Ltd (NASDAQ:BBRY) story. The upcoming Q10 smartphone is likely to appeal more to BlackBerry’s traditional base, and could therefore be more popular initially. By contrast, the Z10 is attempting to woo consumers away from the iPhone and various Android devices. Given the strength of those two franchises, it would be naive to expect the Z10 to gain traction immediately.

Sales mix
While BlackBerry is not going to challenge Apple Inc. (NASDAQ:AAPL) or Samsung for smartphone dominance any time soon, CEO Thorsten Heins has stated on several occasions that many Z10 buyers are coming from other platforms. Such “conquests” made up as much as 45% of early Z10 sales. It will be important to listen for any comments on the earnings call about whether this high rate of conquest sales has continued. The iPhone and Android user bases dwarf the current BlackBerry user base, so convincing some people to switch is critical for the platform’s success.