What Netflix, Inc. (NFLX) Investors Don’t Know Could Hurt Them 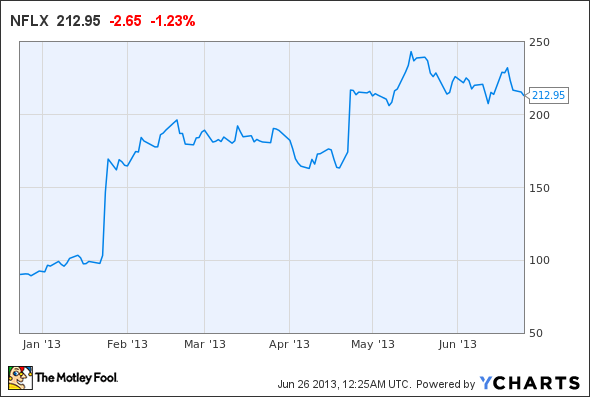 Netflix’s announcement last week that it would premiere a number of new series to be created by Dreamworks Animation Skg Inc (NASDAQ:DWA) was no different. Netflix, Inc. (NASDAQ:NFLX) shares gained more than 7% on the day the deal was announced. Investors clearly believe that by adding content — and especially original and exclusive content — Netflix, Inc. (NASDAQ:NFLX) can differentiate itself from competitors like Amazon.com, Inc. (NASDAQ:AMZN), boosting subscriber growth.

However, exclusive content is very pricey, compared to non-exclusive deals: Original content is especially expensive. This should not be very surprising; content creators and owners obviously charge more for exclusivity, since it prevents them from selling their wares to other streaming video services.

Yet for competitive reasons, Netflix, Inc. (NASDAQ:NFLX) never reveals the cost of new content agreements. This means that investors are only getting half of the story. Everybody wants high-quality content; the important question is whether it comes at the right price. Unfortunately, that’s still a big question mark for investors.

Cash or plastic?
Netflix’s streaming content costs are already very high, as the company has invested heavily in building a robust content library that appeals to many people. However, content costs have begun to escalate even more rapidly recently. There are two related causes. First, competitors like Hulu and Amazon.com, Inc. (NASDAQ:AMZN) have been bidding more aggressively for content in the past year. Second, to fend off these competitors, Netflix has been investing in exclusive and original content, which is more expensive.

As a result, Netflix, Inc. (NASDAQ:NFLX)’s streaming content liabilities increased from $4.82 billion to $5.63 billion over the course of 2012. Near-term streaming liabilities (due within a year) rose even faster: from $1.71 billion to $2.30 billion.

The combined costs of original content investments and international expansion have caused free cash flow to turn negative at Netflix. As a result, Netflix has started tapping the capital markets to finance its content expansion. In late January, the company sold $500 million of new debt, with more than half of the proceeds allocated to “general corporate purposes” such as content acquisition. Management has refused to rule out raising additional debt to fund future original programming.