Apple Inc. (NASDAQ:AAPL) will announce plans for its cash hoard next month, according to Howard Ward, chief investment officer at investment firm Gamco. But if this rumor proves true, the most important question remains unanswered: How will Apple Inc. (NASDAQ:AAPL) return cash to shareholders? Would the company be wise to take ace investor Warren Buffett’s advice, and repurchase more shares?

Buffett has been known to criticize companies for buying back their shares, but it’s never because he thinks share repurchase programs are inherently bad. Instead, he criticizes companies for overpaying for their own stock.

As Buffett outlined in the 2011 Berkshire Hathaway letter to shareholders, he “favor[s] repurchases when two conditions are met: first, a company has ample funds to take care of the operational and liquidity needs of its business; second, its stock is selling at a material discount to the company’s intrinsic business value, conservatively calculated.”

When a company buys back its own shares, they should be “purchased below intrinsic value,” Buffett explains. Price is everything: “The first law of capital allocation — whether the money is slated for acquisitions or share repurchases — is that what is smart at one price is dumb at another.”

With $137 billion in cash and investments, Apple Inc. (NASDAQ:AAPL) has plenty of excess cash. As far as the second condition, Buffett signaled a go-ahead in his March 4 appearance on CNBC, when he commented on Apple Inc. (NASDAQ:AAPL)’s cash hoard, “But if you could buy dollar bills for 80 cents, it’s a very good thing to do.”

Even Berkshire has made investments in both International Business Machines Corp. (NYSE:IBM) and Intel Corporation (NASDAQ:INTC) in recent years, despite Buffett’s famed aversion to tech stocks. Though Berkshire sold the Intel shares less than a year later for a 25% gain, its investment in semiconductor technologies shows that even Berkshire is sometimes willing to put its money behind highly concentrated technology blue chips when the price is right. In fact, IBM remains Berkshire Hathaway’s third-largest public holding.

When measured by P/E, Apple Inc. (NASDAQ:AAPL) now trades in line with Intel, and at a significant discount to IBM. 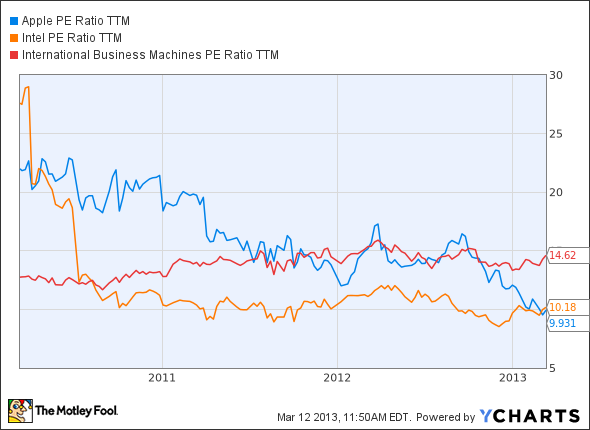