What Has Made The Procter & Gamble Company (PG) Great

I recently explained that the Dow Jones Industrial Average has nine stocks that are considered dividend aristocrats, defined as having paid an annually increasing dividend to shareholders for the past 25 years. Part of their continued success is that they try to make everyone on the planet a customer. They don’t operate in niche markets of only a few hundred thousand consumers; they want everyone to buy their products. The Coca-Cola Company (NYSE:KO), Chevron Corporation (NYSE:CVX), and Exxon Mobil Corporation (NYSE:XOM) are just a few of the names that sell their products to the masses.

What has made Procter & Gamble great

Two brothers-in-law, William Procter and James Gamble, began The Procter & Gamble Company (NYSE:PG) on April 12, 1837. Their company started out as a soap and candle operation, which is actually one of the most important reasons P&G is still around today, and why the company has become a dividend aristocrat. In 1837, everyone used candles to light their homes. Once you burned through your candles, you had to buy more. And people have always needed soap. These were items that had a short life span but were household necessities. P&G’s customers kept coming back week after week to replenish their supplies, and it didn’t matter what the economy was doing — which was a good thing, considering P&G began its life at the start of the Panic of 1837, one of the worst depressions in American history.

Since then, The Procter & Gamble Company (NYSE:PG) has survived the Great Depression, the most recent recession, and countless other periods of economic stress — and it’s still manged to grow its revenue by an annual rate of 9.3% since 1932. That’s what happens when you sell products consumers need, and will make repeat purchases of, during good times and bad. You can put off buying a car or a home, but even if times are tough, you still need more soap, cleaning products, razor blades, and toilet paper.

The Procter & Gamble Company (NYSE:PG) is the oldest dividend aristocrat on the Dow, having increased its dividend every year since 1957. Let’s look at how that dividend has grown over the past several years. 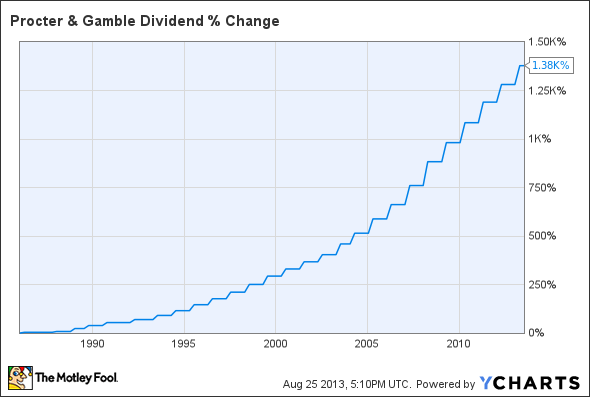 In short, this is an aristocrat that’s made millionaires out of its dividend.