Exelon Corporation (NYSE:EXC) stock has been on a roller-coaster ride over the last year, and investors have been left wondering whether this dividend stock will ever put stable returns on the table again. While there are a multitude of macro and market reasons why Exelon Corporation (NYSE:EXC) stock is so volatile, let’s take a look at something the utility does have control over: its margins.

Margins matter
Margins are the easiest way for investors to see how much money a company keeps as a percentage of its total sales. In the case of utilities, gross margins describe how much a utility is spending to deliver electricity to its customers, no frills attached.

Operating margins add in more nuance, and are the best tools for investors to analyze a utility’s overall efficiency. Unlike high-level gross margins, operating margins take into account expenses such as fuel, operations and maintenance, and depreciation/amortization.

Net profit incorporates even more expenses than operating, but because utilities tend to have long-term spending schedules with major costs spread unevenly on a quarter-to-quarter basis, it’s best to avoid putting too much faith behind these numbers.

Do Exelon stock margins make the cut?
A glance at gross margins point to tough times for Exelon Corporation (NYSE:EXC) stock. Not only did the utility’s margins dip 9.3% in the past year for the biggest drop, but they also place Exelon Corporation (NYSE:EXC) at the bottom of the gross margin bucket. At 51%, its next closest competitor, FirstEnergy Corp. (NYSE:FE), is still around 7 percentage points higher. FirstEnergy Corp. (NYSE:FE)’s focus on coal and considerable debt have recently created tough times for this traditional utility. 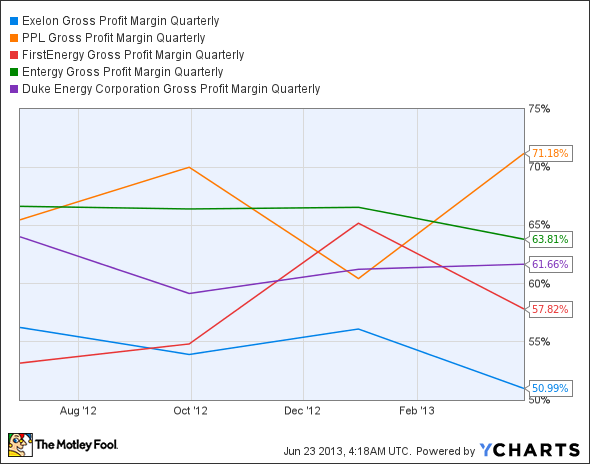 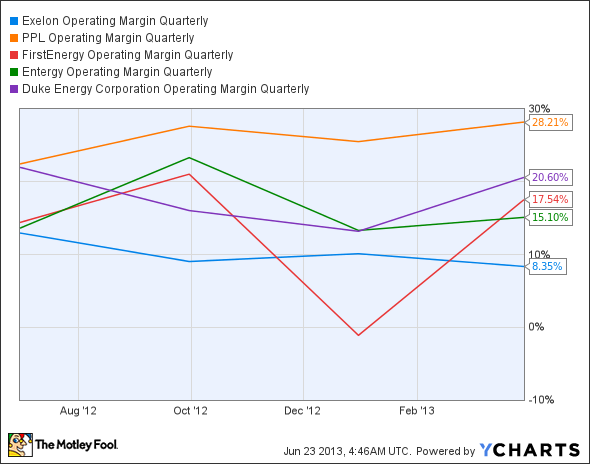 Can Exelon stock excel?
There’s no beating around the bush: Exelon Corporation (NYSE:EXC) (and its stock) have had a rough year. But Exelon’s demise might be short-lived. Its nuclear-centric portfolio was pummeled by cheap natural gas in 2012, and it’s not alone. Global nuclear output fell a record 6.9%, and the U.S. witnessed a significant 2.9% stumble. However, natural gas prices are on the rise, and Exelon’s 19,000 MW of nuclear power are quickly returning to their previous cost competitiveness. Exelon is also managing to make the most of regulations, and the recent enactment of smart grid bill put the utility’s energy-efficiency programs back on track for $65 million more in 2014 revenue.

Exelon Corporation (NYSE:EXC) stock has slumped 17.9% in the last year and its margins are in the dumps. But its beaten-down share price isn’t indicative of future potential, and the utility’s upside could pan out for patient investors.

The article What Happened to Exelon Stock Margins? originally appeared on Fool.com and is written by Justin Loiseau.

Fool contributor Justin Loiseau has no position in any stocks mentioned, but he does use electricity. You can follow him on Twitter @TMFJLo and on Motley Fool CAPS @TMFJLo.The Motley Fool recommends Exelon.