What Are You Willing to Pay for Noodles & Co (NDLS)?

Noodles & Co (NASDAQ:NDLS) ignited the IPO scene last week by nearly tripling in value its very first week of public trading. Investors are buzzing about the opportunity to get in on a serious growth prospect. How big is the growth potential here though? The company currently operates 345 restaurants. Well, the plan management drafted calls for 2,500 – an increase of nearly 700%.

This projected store count is simply ginormous. But how much should investors be willing to pay to get their own piece of the action?

To help analyze these noodle-ish profits, let’s compare with some peers in the restaurant sector like Bloomin’ Brands Inc (NASDAQ:BLMN), and Darden Restaurants, Inc. (NYSE:DRI). Unfortunately neither company gives segmented financial information for Carrabba’s Italian Grill or the Olive Garden.

Bloomin’ Brands just beat both revenue and profit expectations in the most recent quarter, yet its profit margin remains very low. According to CFO David Deno, this is partly attributable to “increases in beef and alcoholic beverage”. This comment is related more towards Outback Steakhouse than Carrabba’s. Therefore, its reasonable to assume that Outback is more responsible for the low profit margin than Carrabba’s. Perhaps by itself, Carrabba’s would have a much more appealing margin.

The bad news with Carrabba’s is same store sales are falling – down 1.7% last quarter. Management is trying to drive traffic to these restaurants by implemented a major overhaul of the brand by remodeling 50-60 locations this year.

Darden is growing revenue – up 11% last quarter from last year – but has had to sacrifice profits to do so – down 12%. CEO Clarence Otis said “we’re prepared to accept some pressure on margins at that level to really renew same-restaurant guest count growth.” He went on to claim that Olive Garden’s margin is very good, though he offered no specifics. 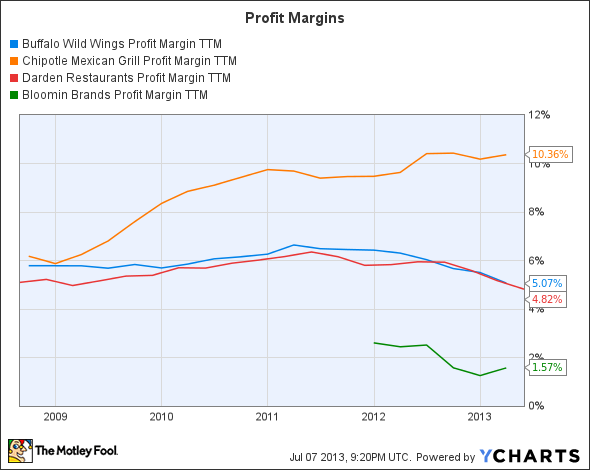 Perhaps Chipotle Mexican Grill, Inc. (NYSE:CMG) and Buffalo Wild Wings (NASDAQ:BWLD) would be better competitors to compare with Noodles, since all three are part of the high growth “fast casual” restaurant sector.

Chipotle has done very well growing profit margins, even when facing food inflation costs like those seen in 2012. Buffalo Wild Wings hasn’t fared quite as well with its margin as chicken wing prices spiked 62% in 2012 compared to 2011. This caused the company’s margin to fall to 5% – still better than either Darden or Bloomin’.

Based on comparison with competitors, Noodles’s profit margin is slim. But I believe with time it will begin to trend closer to the industry average. For example, as the company grows, it won’t need to spend as much per restaurant on infrastructure costs. The infrastructure will already be in place. This among other things should lead to better margins.

McDonald’s Corporation (MCD): Is This Dividend Stock on the Value Menu...