What a Wonderful World With Whole Foods Market, Inc. (WFM)

Whole Foods Market, Inc. (NASDAQ:WFM) is now in the travel biz, organizing foodie tours, wellness adventures, hands on cooking, global volunteering, and more for a total of 15 separate tours. And so far I have not read one word about it in the financial press.

Take me away, Whole Foods!

The organic and natural grocer chain of 355 stores in the US, Canada, and the UK has buyers crossing the globe for its products and ingredients for its 360 private label brand. Co-CEO John Mackey in a letter entitled Dear Traveler says Whole Journeys is “an experiential travel company designed to bring you closer to the source of the products we sell in our stores. ” Talk about destination retail!

Unusual yes, surprising, no. The company has been at the forefront of fair trade, GMO labeling, employee benefits, and forward thinking retail initiatives. There was probably plenty of muttering behind Walt Disney’s back when he first discussed Disneyland. That’s turned out pretty well for The Walt Disney Company (NYSE:DIS) with its resorts, cruises, and timeshares comprising an important revenue stream, almost a third of revenues.

In 2012 the parks and resorts division created $1.9 billion in operating profit up 22%. And its cruises like the The Walt Disney Company (NYSE:DIS) Fantasy do have theme or experiential voyages like a planned film-themed cruise for Turner Classic Movies later this year.

Whole Foods Market, Inc. (NASDAQ:WFM) is taking applications now from tour operators and travel agents for future itineraries. And maybe it’s not so out of place because Costco Warehouse has member travel opportunities, but not organized as much with a philosophy or mission as Whole Foods Market, Inc. (NASDAQ:WFM). And remember their affluent crunchy customer base can afford a $3,000 trip to Peru to meet with micropreneurs and hike Macchu Pichu or a $4,300 bike tour through France. Compared to prices I’ve seen it’s competitive.

This World Journeys initiative is hard to value, although it’s reasonable to assume that with 15 trips limited to 15 or fewer travelers at an average per person price of $4,000, this adds up to less than a million dollars. The variable is how often annually the trips take place, and that info is lacking . But even if it’s monthly, $12 million doesn’t move the needle for Whole Foods Market, Inc. (NASDAQ:WFM) as it raked in $3.02 billion in revenue in Q3.

Speaking of raking it in, the company just reported Q3 earnings of a 21% increase in sales. Gross margin expanded to 36.6%. The stores are generating $996 per square foot and attracting 1 million customers per day. Despite what would normally be seen as a good quarter the stock sold off after hours as analysts felt growth was decelerating.

That is perplexing as the company sees room for 1,000 US stores and already has signed leases for 90 stores, a three year supply. And the company is moving into diverse neighborhoods from high end Danbury, CT to Detroit, MI.  However, the company has had to make “price investments, sacrificing a little margin in some of the new neighborhood stores.The company saw 20% EPS growth for the quarter but guided higher for 12-14% sales growth and 17-18% EPS growth.

On the call the JP Morgan analyst alluded to the IPO of Sprouts Farmers Market on August 1; Co-CEO Walter Robb said,” We love competition. It makes us better. We get to respond and innovate and grow. So bring it on.” (source Seeking Alpha transcript).

Whole Foods Market, Inc. (NASDAQ:WFM) has a dominant position in the organic grocer industry much as The Walt Disney Company (NYSE:DIS)does in media and resorts. Competitors like The Fresh Market Inc (NASDAQ:TFM) don’t have the size or breadth, and traditional grocers don’t have the loyal shoppers, trained cheese and fishmongers and butchers, and variety of organic and natural foods. Whole Foods is really a niche unto itself, a lifestyle grocer. And none of these competitors has the innovation that Whole Foods has.

That’s why Whole Journeys may gain traction after a few years. As of right now it may be just a,”run it up the flagpole and see who salutes,” trial but its loyal foodie and natural lifestyle customers could go for it in a big way.

Who else should get in the travel game

As a founder run concept that has been a very successful growth story just as The Walt Disney Company (NYSE:DIS) was it’s most similar to Starbucks Corporation (NASDAQ:SBUX) with its sense of community, better than average treatment of employees, and global sourcing with attention paid to fair trade practices.

If Whole Journeys takes off (excuse the pun), Starbucks Corporation (NASDAQ:SBUX) could easily try something similar, Java Journeys, maybe. Cocoa and coffee themed expeditions to far flung coffee farms would also be of interest to their loyal, if not addicted, customers.

Visits to the more exotic of their 18,000 stores around the world are not out of the realm of the imagination.

How they compete as stocks

All three of these have been superior performers over the last ten years with Whole Foods Market, Inc. (NASDAQ:WFM) and Starbucks Corporation (NASDAQ:SBUX) trading in lockstep. 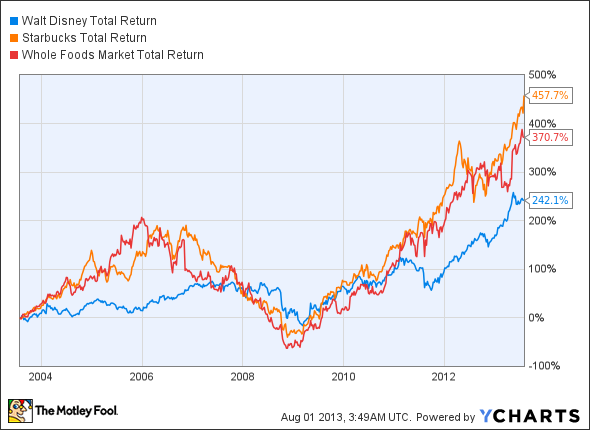 Why Starbucks Corporation (SBUX) Is Effortlessly Taking Over the World