A SWOT analysis is a look at a company’s strengths, weaknesses, opportunities, and threats, and is a tremendous way to gain a detailed and thorough perspective on a company and its future.  As 2013 begins, I would like to pinpoint on a leading marketer, producer, and distributer of nonalcoholic beverages in Western Europe, Coca-Cola Enterprises Inc (NYSE:CCE). 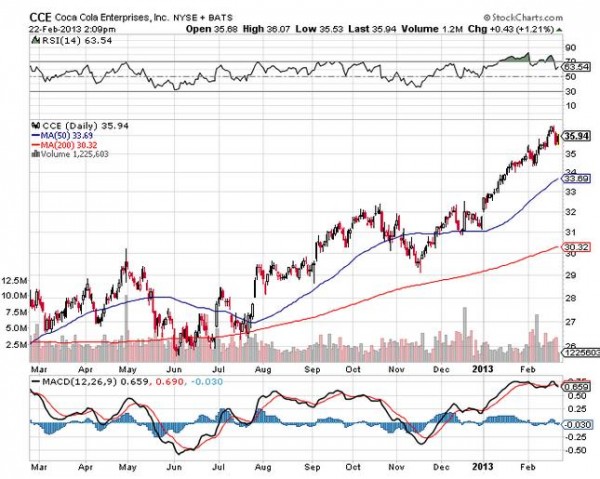 Warren Buffett once said, “Never invest in a business you can’t understand.” This not only allows the investor to purchase a company with conviction, however also allows them to spot trends blind to unfamiliar eyes. With this in mind, investors in any company should fully understand the business model of the company. Coca-Cola Enterprises is a marketer, producer, and distributer of nonalcoholic beverages across the Western European countries of France, Monaco, Luxembourg, Belgium, the Netherlands, Great Britain, Norway, and Sweden. 90% of sales volume for the company is attributed to sales under the brands of The Coca-Cola Company. The company serves about 170 million consumers, and in 2011 sold 12 billion bottles and cans. Because of the incredibly competitive beverage market, Coca-Cola Enterprises withholds a net profit margin of only 5.22%.

1). Solid Revenue Growth: In 2010, Coca-Cola Enterprises reported revenue of $6.71 billion; in 2012, the company announced revenue of $8.06 billion, representing year over year annual growth of 9.60%, a solid trend which is highly anticipated to sustain into the future with projections placing 2016 revenue at $9.48 billion (this growth has been a result of growth in volume sales across Belgium, France, Great Britain, and the Netherlands for consecutive years)

2). Positive Free Cash Flow: As of the end of 2012, Coca-Cola Enterprises possessed $140 million of free cash flow on their balance sheets, which the company can use to reward shareholders or to reinvest back into their own business

3). Dividend: Currently, the company pays out quarterly dividends of $0.20, which annualized puts the dividend as yielding 2.21%

4). Institutional Vote of Confidence: 76.96% of shares outstanding are held by institutional investors, displaying the confidence some of the largest investors in the world have in the company and its future

5). Reasonable Valuation: At the moment, the company possesses a price to earnings ratio of 16.12, a price to book ratio of 3.80, and a price to sales ratio of 1.26; all of which represent a company trading with a fairly reasonable valuation

6). Brand Loyalty: Coca-Cola Enterprises sells the vast majority of its products under the brand names of the Coca-Cola Company, under an agreement which lasts until 2020, and the brand loyalty consumers display towards these products help establish solid revenue streams for years to come (Coca-Cola was ranked the third most powerful brand in the world, with more than 500 nonalcoholic brand names)

7). Established Distribution Network: The company possesses 13,250 employees, 17 manufacturing sites, and 51 distribution facilities, and with this established distribution network comes an increased level of security and predictability for investors

1). Long Term Debt: Despite possessing $721 million of cash and cash equivalents on their balance sheets, the company’s debt load of $2.83 billion results in a net debt equating to $2.11 billion, however the company’s debt position has been steadily decreasing over the past 10 years from over $10 billion in 2004

2). Volatility: Coca-Cola Enterprises presently carries a beta ratio of 1.20, which represents a company trading with slightly more volatility than the overall market, a downside for long-term investors

2). Dividend Growth: Since implementing their dividend program in 1986, the company has consistently raised their dividend payouts, and should continue to do so into the future, rewarding investors

4). Growth in Core Markets: Since 2006, four out of the company’s six main regions have grown in per capita consumption, as the number of 8 ounce servings of products of the Coca-Cola company per person per year, and further growth in these core markets could present opportunity to investors 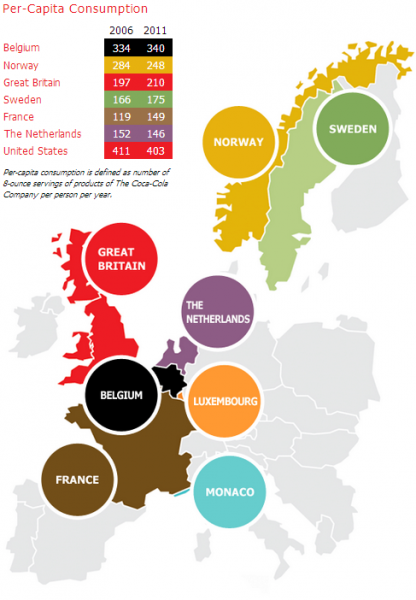 1). Lack of Diversified Exposure: While the company’s reach spans across multiple countries in western Europe, Coca-Cola Enterprises’ lack of diversified exposure is a major threat to the company in the case of economic downfall exclusive or particularly severe in Western Europe

The article Western Europe’s Carbonated Play originally appeared on Fool.com and is written by Ryan Guenette.

Will The Coca-Cola Company (KO) Help You Retire Rich?