The market has been volatile as the Federal Reserve continues its rate hikes to normalize the interest rates. Small cap stocks have been hit hard as a result, as the Russell 2000 ETF (IWM) has underperformed the larger S&P 500 ETF (SPY) by about 4 percentage points through November 16th. SEC filings and hedge fund investor letters indicate that the smart money seems to be paring back their overall long exposure since summer months, and the funds’ movements is one of the reasons why the major indexes have retraced. In this article, we analyze what the smart money thinks of West Pharmaceutical Services Inc. (NYSE:WST) and find out how it is affected by hedge funds’ moves.

West Pharmaceutical Services Inc. (NYSE:WST) investors should pay attention to an increase in support from the world’s most elite money managers of late. Our calculations also showed that WST isn’t among the 30 most popular stocks among hedge funds.

According to most investors, hedge funds are perceived as unimportant, old investment vehicles of the past. While there are greater than 8,000 funds in operation at present, Our experts hone in on the top tier of this club, about 700 funds. These investment experts control bulk of the smart money’s total asset base, and by tailing their unrivaled investments, Insider Monkey has unsheathed a number of investment strategies that have historically defeated the market. Insider Monkey’s flagship hedge fund strategy beat the S&P 500 index by 6 percentage points annually since its inception in May 2014 through early November 2018. We were able to generate large returns even by identifying short candidates. Our portfolio of short stocks lost 24% since February 2017 (through December 3rd) even though the market was up nearly 23% during the same period. We just shared a list of 11 short targets in our latest quarterly update.

At the end of the third quarter, a total of 17 of the hedge funds tracked by Insider Monkey held long positions in this stock, a change of 31% from the second quarter of 2018. Below, you can check out the change in hedge fund sentiment towards WST over the last 13 quarters. With the smart money’s capital changing hands, there exists a few key hedge fund managers who were upping their stakes considerably (or already accumulated large positions). 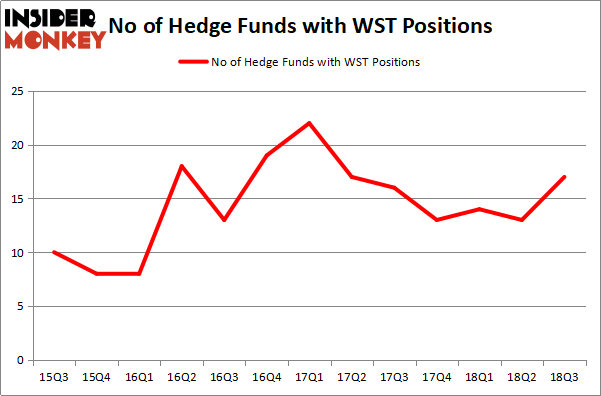 More specifically, Fisher Asset Management was the largest shareholder of West Pharmaceutical Services Inc. (NYSE:WST), with a stake worth $113.9 million reported as of the end of September. Trailing Fisher Asset Management was Intermede Investment Partners, which amassed a stake valued at $31.2 million. Renaissance Technologies, Rock Springs Capital Management, and Adage Capital Management were also very fond of the stock, giving the stock large weights in their portfolios.

As one would reasonably expect, some big names have been driving this bullishness. Adage Capital Management, managed by Phill Gross and Robert Atchinson, initiated the most outsized position in West Pharmaceutical Services Inc. (NYSE:WST). Adage Capital Management had $18.5 million invested in the company at the end of the quarter. Lee Ainslie’s Maverick Capital also initiated a $5.2 million position during the quarter. The following funds were also among the new WST investors: Joel Greenblatt’s Gotham Asset Management, Andrew Feldstein and Stephen Siderow’s Blue Mountain Capital, and Matthew Hulsizer’s PEAK6 Capital Management.

As you can see these stocks had an average of 11.25 hedge funds with bullish positions and the average amount invested in these stocks was $330 million. That figure was $253 million in WST’s case. Autohome Inc (NYSE:ATHM) is the most popular stock in this table. On the other hand Pearson PLC (NYSE:PSO) is the least popular one with only 3 bullish hedge fund positions. West Pharmaceutical Services Inc. (NYSE:WST) is not the most popular stock in this group but hedge fund interest is still above average. This is a slightly positive signal but we’d rather spend our time researching stocks that hedge funds are piling on. In this regard ATHM might be a better candidate to consider a long position.