Is Wesco Aircraft Holdings Inc (NYSE:WAIR) a good place to invest some of your money right now? We can gain invaluable insight to help us answer that question by studying the investment trends of top investors, who employ world-class Ivy League graduates, who are given immense resources and industry contacts to put their financial expertise to work. The top picks of these firms have historically outperformed the market when we account for known risk factors, making them very valuable investment ideas.

Wesco Aircraft Holdings Inc (NYSE:WAIR) has experienced an increase in support from the world’s most elite money managers in recent months. Our calculations also showed that WAIR isn’t among the 30 most popular stocks among hedge funds.

What have hedge funds been doing with Wesco Aircraft Holdings Inc (NYSE:WAIR)?

Heading into the fourth quarter of 2018, a total of 17 of the hedge funds tracked by Insider Monkey held long positions in this stock, a change of 42% from the second quarter of 2018. The graph below displays the number of hedge funds with bullish position in WAIR over the last 13 quarters. With the smart money’s capital changing hands, there exists an “upper tier” of notable hedge fund managers who were boosting their holdings meaningfully (or already accumulated large positions). 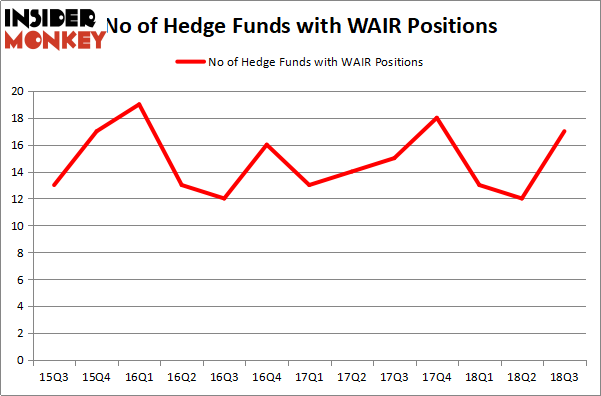 Among these funds, Makaira Partners held the most valuable stake in Wesco Aircraft Holdings Inc (NYSE:WAIR), which was worth $121.7 million at the end of the third quarter. On the second spot was Royce & Associates which amassed $34.6 million worth of shares. Moreover, Wallace R. Weitz & Co., Cove Street Capital, and Pzena Investment Management were also bullish on Wesco Aircraft Holdings Inc (NYSE:WAIR), allocating a large percentage of their portfolios to this stock.

With a general bullishness amongst the heavyweights, specific money managers were leading the bulls’ herd. Gotham Asset Management, managed by Joel Greenblatt, created the most valuable position in Wesco Aircraft Holdings Inc (NYSE:WAIR). Gotham Asset Management had $0.3 million invested in the company at the end of the quarter. Jim Simons’s Renaissance Technologies also made a $0.2 million investment in the stock during the quarter. The following funds were also among the new WAIR investors: Michael Platt and William Reeves’s BlueCrest Capital Mgmt. and Gavin Saitowitz and Cisco J. del Valle’s Springbok Capital.

As you can see these stocks had an average of 10.25 hedge funds with bullish positions and the average amount invested in these stocks was $62 million. That figure was $243 million in WAIR’s case. Coherus Biosciences Inc (NASDAQ:CHRS) is the most popular stock in this table. On the other hand 111, Inc. (NASDAQ:YI) is the least popular one with only 3 bullish hedge fund positions. Wesco Aircraft Holdings Inc (NYSE:WAIR) is not the most popular stock in this group but hedge fund interest is still above average. This is a slightly positive signal but we’d rather spend our time researching stocks that hedge funds are piling on. In this regard CHRS might be a better candidate to consider a long position.