Were Hedge Funds Right About Warming Up To Amgen, Inc. (AMGN)?

We can judge whether Amgen, Inc. (NASDAQ:AMGN) is a good investment right now by following the lead of some of the best investors in the world and piggybacking their ideas. There’s no better way to get these firms’ immense resources and analytical capabilities working for us than to follow their lead into their best ideas. While not all of these picks will be winners, our research shows that these picks historically outperformed the market when we factor in known risk factors.

Amgen, Inc. (NASDAQ:AMGN) was in 48 hedge funds’ portfolios at the end of the third quarter of 2019. AMGN has experienced an increase in hedge fund sentiment lately. There were 42 hedge funds in our database with AMGN holdings at the end of the previous quarter. Our calculations also showed that AMGN isn’t among the 30 most popular stocks among hedge funds.

In the eyes of most traders, hedge funds are perceived as underperforming, old investment vehicles of the past. While there are over 8000 funds with their doors open at present, We choose to focus on the masters of this group, about 750 funds. These hedge fund managers direct bulk of all hedge funds’ total capital, and by keeping track of their finest investments, Insider Monkey has determined a number of investment strategies that have historically outperformed the market. Insider Monkey’s flagship short hedge fund strategy outrun the S&P 500 short ETFs by around 20 percentage points per annum since its inception in May 2014. Our portfolio of short stocks lost 27.8% since February 2017 (through November 21st) even though the market was up more than 39% during the same period. We just shared a list of 7 short targets in our latest quarterly update .

Unlike the largest US hedge funds that are convinced Dow will soar past 40,000 or the world’s most bearish hedge fund that’s more convinced than ever that a crash is coming, our long-short investment strategy doesn’t rely on bull or bear markets to deliver double digit returns. We only rely on the best performing hedge funds‘ buy/sell signals. We’re going to view the key hedge fund action surrounding Amgen, Inc. (NASDAQ:AMGN).

What does smart money think about Amgen, Inc. (NASDAQ:AMGN)?

At Q3’s end, a total of 48 of the hedge funds tracked by Insider Monkey were long this stock, a change of 14% from the previous quarter. Below, you can check out the change in hedge fund sentiment towards AMGN over the last 17 quarters. With hedgies’ sentiment swirling, there exists an “upper tier” of noteworthy hedge fund managers who were increasing their holdings substantially (or already accumulated large positions). 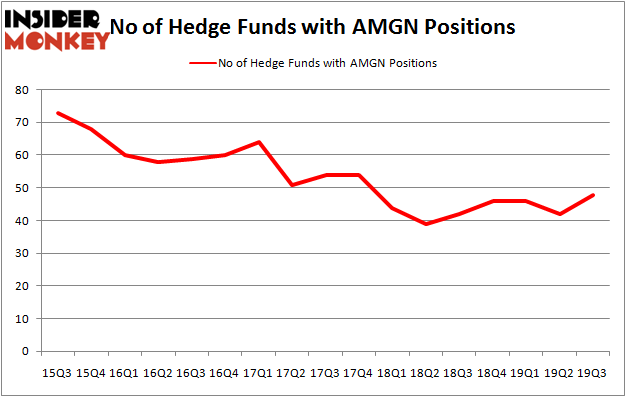 According to publicly available hedge fund and institutional investor holdings data compiled by Insider Monkey, Renaissance Technologies, holds the number one position in Amgen, Inc. (NASDAQ:AMGN). Renaissance Technologies has a $707.9 million position in the stock, comprising 0.6% of its 13F portfolio. On Renaissance Technologies’s heels is David E. Shaw of D E Shaw, with a $240.5 million position; the fund has 0.3% of its 13F portfolio invested in the stock. Remaining hedge funds and institutional investors that are bullish include Richard S. Pzena’s Pzena Investment Management, Cliff Asness’s AQR Capital Management and Noam Gottesman’s GLG Partners. In terms of the portfolio weights assigned to each position Valueworks LLC allocated the biggest weight to Amgen, Inc. (NASDAQ:AMGN), around 4.47% of its portfolio. Chiron Investment Management is also relatively very bullish on the stock, dishing out 1.67 percent of its 13F equity portfolio to AMGN.

As one would reasonably expect, key money managers have been driving this bullishness. Alyeska Investment Group, managed by Anand Parekh, initiated the biggest position in Amgen, Inc. (NASDAQ:AMGN). Alyeska Investment Group had $39.1 million invested in the company at the end of the quarter. Kris Jenner, Gordon Bussard, Graham McPhail’s Rock Springs Capital Management also initiated a $24.4 million position during the quarter. The other funds with new positions in the stock are Benjamin A. Smith’s Laurion Capital Management, David E. Shaw’s D E Shaw, and Michael Gelband’s ExodusPoint Capital.

As you can see these stocks had an average of 47.75 hedge funds with bullish positions and the average amount invested in these stocks was $3031 million. That figure was $2570 million in AMGN’s case. Union Pacific Corporation (NYSE:UNP) is the most popular stock in this table. On the other hand Sanofi (NASDAQ:SNY) is the least popular one with only 27 bullish hedge fund positions. Amgen, Inc. (NASDAQ:AMGN) is not the most popular stock in this group but hedge fund interest is still above average. Our calculations showed that top 20 most popular stocks among hedge funds returned 34.7% in 2019 through November 22nd and outperformed the S&P 500 ETF (SPY) by 8.5 percentage points. Hedge funds were also right about betting on AMGN as the stock returned 20% during the fourth quarter (through 11/22) and outperformed the market. Hedge funds were rewarded for their relative bullishness.