How do you pick the next stock to invest in? One way would be to spend days of research browsing through thousands of publicly traded companies. However, an easier way is to look at the stocks that smart money investors are collectively bullish on. Hedge funds and other institutional investors usually invest large amounts of capital and have to conduct due diligence while choosing their next pick. They don’t always get it right, but, on average, their stock picks historically generated strong returns after adjusting for known risk factors. With this in mind, let’s take a look at the recent hedge fund activity surrounding The Coca-Cola Company (NYSE:KO) and determine whether hedge funds had an edge regarding this stock.

Is The Coca-Cola Company (NYSE:KO) a buy, sell, or hold? Prominent investors were betting on the stock. The number of long hedge fund positions advanced by 4 recently. Our calculations also showed that KO isn’t among the 30 most popular stocks among hedge funds (click for Q1 rankings and see the video for a quick look at the top 5 stocks).

With all of this in mind let’s take a look at the key hedge fund action surrounding The Coca-Cola Company (NYSE:KO). 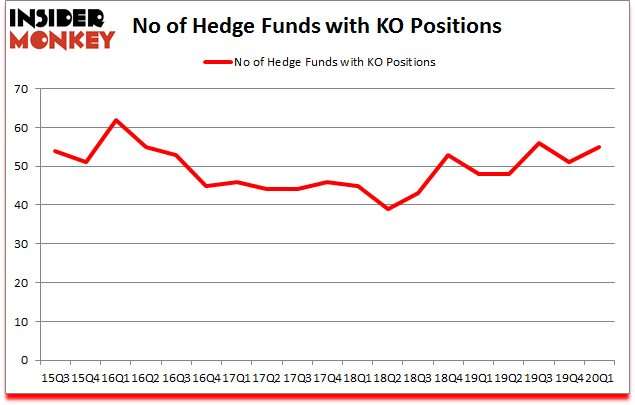 When looking at the institutional investors followed by Insider Monkey, Berkshire Hathaway, managed by Warren Buffett, holds the largest position in The Coca-Cola Company (NYSE:KO). Berkshire Hathaway has a $17.7 billion position in the stock, comprising 10.1% of its 13F portfolio. The second most bullish fund manager is Arrowstreet Capital, led by Peter Rathjens, Bruce Clarke and John Campbell, holding a $433.9 million position; 1.2% of its 13F portfolio is allocated to the stock. Other peers that hold long positions comprise Donald Yacktman’s Yacktman Asset Management, John Overdeck and David Siegel’s Two Sigma Advisors and Rajiv Jain’s GQG Partners. In terms of the portfolio weights assigned to each position Berkshire Hathaway allocated the biggest weight to The Coca-Cola Company (NYSE:KO), around 10.08% of its 13F portfolio. Bronson Point Partners is also relatively very bullish on the stock, designating 6.17 percent of its 13F equity portfolio to KO.

Consequently, key hedge funds were breaking ground themselves. Arrowstreet Capital, managed by Peter Rathjens, Bruce Clarke and John Campbell, created the most outsized position in The Coca-Cola Company (NYSE:KO). Arrowstreet Capital had $433.9 million invested in the company at the end of the quarter. Rajiv Jain’s GQG Partners also initiated a $263.5 million position during the quarter. The other funds with new positions in the stock are Paul Marshall and Ian Wace’s Marshall Wace LLP, Benjamin A. Smith’s Laurion Capital Management, and Pedro Escudero’s DPM Capital.

Let’s now review hedge fund activity in other stocks – not necessarily in the same industry as The Coca-Cola Company (NYSE:KO) but similarly valued. These stocks are Novartis AG (NYSE:NVS), Bank of America Corporation (NYSE:BAC), Pfizer Inc. (NYSE:PFE), and The Walt Disney Company (NYSE:DIS). All of these stocks’ market caps match KO’s market cap.

As you can see these stocks had an average of 73.5 hedge funds with bullish positions and the average amount invested in these stocks was $7904 million. That figure was $19902 million in KO’s case. The Walt Disney Company (NYSE:DIS) is the most popular stock in this table. On the other hand Novartis AG (NYSE:NVS) is the least popular one with only 30 bullish hedge fund positions. The Coca-Cola Company (NYSE:KO) is not the least popular stock in this group but hedge fund interest is still below average. This is a slightly negative signal and we’d rather spend our time researching stocks that hedge funds are piling on. Our calculations showed that top 10 most popular stocks among hedge funds returned 41.4% in 2019 and outperformed the S&P 500 ETF (SPY) by 10.1 percentage points. These stocks gained 12.3% in 2020 through June 30th and surpassed the market by 15.5 percentage points. Unfortunately KO wasn’t nearly as popular as these 10 stocks (hedge fund sentiment was quite bearish); KO investors were disappointed as the stock returned 1.9% during the second quarter and underperformed the market. If you are interested in investing in large cap stocks with huge upside potential, you should check out the top 10 most popular stocks among hedge funds as most of these stocks already outperformed the market in 2020.