Were Hedge Funds Right About Souring On Pfizer Inc. (PFE)?

Pfizer Inc. (NYSE:PFE) shareholders have witnessed a decrease in hedge fund interest of late. Our calculations also showed that PFE isn’t among the 30 most popular stocks among hedge funds.

Heading into the second quarter of 2019, a total of 53 of the hedge funds tracked by Insider Monkey were bullish on this stock, a change of -10% from the previous quarter. The graph below displays the number of hedge funds with bullish position in PFE over the last 15 quarters. As you can see, hedge funds have been souring on Pfizer since the first quarter of 2016 when Pfizer shares were trading below $30. 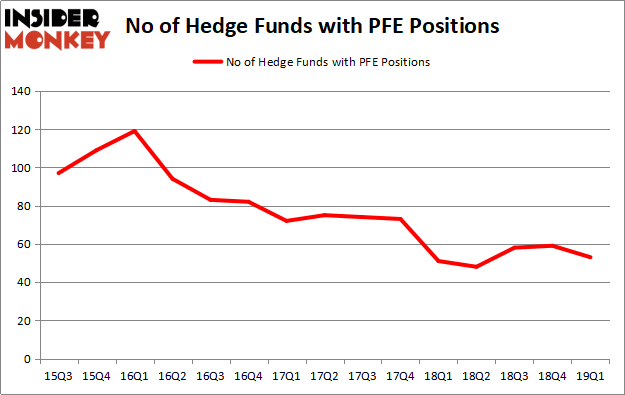 Seeing as Pfizer Inc. (NYSE:PFE) has experienced falling interest from the aggregate hedge fund industry, it’s safe to say that there were a few money managers that decided to sell off their positions entirely last quarter. Interestingly, Samuel Isaly’s OrbiMed Advisors dropped the biggest stake of all the hedgies tracked by Insider Monkey, valued at an estimated $26.3 million in stock. Late Irving Kahn’s fund, Kahn Brothers, also dumped its stock, about $23.3 million worth. These bearish behaviors are important to note, as aggregate hedge fund interest fell by 6 funds last quarter.

As you can see these stocks had an average of 50 hedge funds with bullish positions and the average amount invested in these stocks was $7747 million. That figure was $5290 million in PFE’s case. Wells Fargo & Company (NYSE:WFC) is the most popular stock in this table. On the other hand Novartis AG (NYSE:NVS) is the least popular one with only 33 bullish hedge fund positions. Pfizer Inc. (NYSE:PFE) is not the most popular stock in this group but hedge fund interest is still above average. Our calculations showed that top 20 most popular stocks among hedge funds returned 1.9% in Q2 through May 30th and outperformed the S&P 500 ETF (SPY) by more than 3 percentage points. Hedge funds were also right about betting on PFE, though not to the same extent, as the stock lost -0.5% during the same time frame and outperformed the market by a tiny margin.