Were Hedge Funds Right About Piling Into Microsoft Corporation (MSFT)?

At the end of February we announced the arrival of the first US recession since 2009 and we predicted that the market will decline by at least 20% in (Recession is Imminent: We Need A Travel Ban NOW). In these volatile markets we scrutinize hedge fund filings to get a reading on which direction each stock might be going. In this article, we will take a closer look at hedge fund sentiment towards Microsoft Corporation (NASDAQ:MSFT) and determine the smart money was really smart about this tech giant.

Is Microsoft Corporation (NASDAQ:MSFT) a buy, sell, or hold? Investors who are in the know piled into Microsoft during the first quarter. The number of long hedge fund bets moved up by 46 lately. This kind of sentiment change rarely happens. Our calculations also showed that MSFT ranks #2 among the 30 most popular stocks among hedge funds (click for Q1 rankings and see the video for a quick look at the top 5 stocks).

At Insider Monkey we scour multiple sources to uncover the next great investment idea. There is a lot of volatility in the markets and this presents amazing investment opportunities from time to time. For example, this trader claims to deliver juiced up returns with one trade a week, so we are checking out his highest conviction idea. A second trader claims to score lucrative profits by utilizing a “weekend trading strategy”, so we look into his strategy’s picks. We read hedge fund investor letters and listen to stock pitches at hedge fund conferences. We recently recommended several stocks partly inspired by legendary Bill Miller’s investor letter. Our best call in 2020 was shorting the market when the S&P 500 was trading at 3150 in February after realizing the coronavirus pandemic’s significance before most investors. Keeping this in mind we’re going to take a glance at the recent hedge fund action regarding Microsoft Corporation (NASDAQ:MSFT). 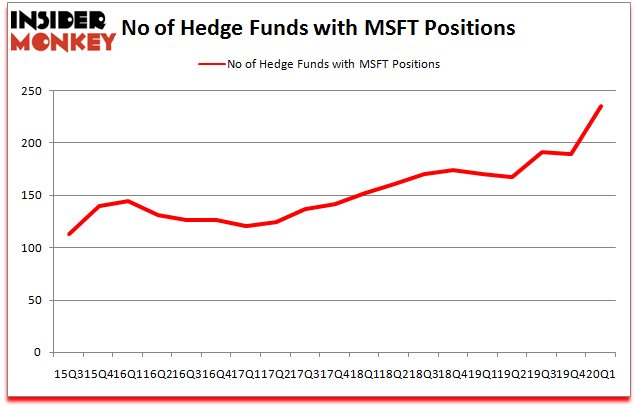 The largest stake in Microsoft Corporation (NASDAQ:MSFT) was held by Fisher Asset Management, which reported holding $3383.9 million worth of stock at the end of September. It was followed by Eagle Capital Management with a $2325 million position. Other investors bullish on the company included Arrowstreet Capital, AQR Capital Management, and Tiger Global Management LLC. In terms of the portfolio weights assigned to each position Thrive Capital allocated the biggest weight to Microsoft Corporation (NASDAQ:MSFT), around 58.15% of its 13F portfolio. Joho Capital is also relatively very bullish on the stock, earmarking 30.16 percent of its 13F equity portfolio to MSFT.

As one would reasonably expect, some big names have been driving this bullishness. Melvin Capital Management, managed by Gabriel Plotkin, established the biggest position in Microsoft Corporation (NASDAQ:MSFT). Melvin Capital Management had $426.8 million invested in the company at the end of the quarter. Eric W. Mandelblatt and Gaurav Kapadia’s Soroban Capital Partners also initiated a $412.2 million position during the quarter. The following funds were also among the new MSFT investors: Tim Hurd and Ed Magnus’s BlueSpruce Investments, Daniel Sundheim’s D1 Capital Partners, and William von Mueffling’s Cantillon Capital Management.

As you can see these stocks had an average of 172 hedge funds with bullish positions and the average amount invested in these stocks was $33490 million. That figure was $31439 million in MSFT’s case. Amazon.com, Inc. (NASDAQ:AMZN) is the most popular stock in this table. On the other hand Apple Inc. (NASDAQ:AAPL) is the least popular one with only 123 bullish hedge fund positions. Microsoft Corporation (NASDAQ:MSFT) is not the most popular stock in this group but hedge fund interest is still above average. Our calculations showed that top 10 most popular stocks among hedge funds returned 41.4% in 2019 and outperformed the S&P 500 ETF (SPY) by 10.1 percentage points. These stocks gained 13.3% in 2020 through June 25th but still beat the market by 16.8 percentage points. Hedge funds were also right about betting on MSFT as the stock returned 27.4% in Q2 (through June 25th) and outperformed the market. Hedge funds were rewarded for their relative bullishness.

Here’s Why Adobe (ADBE) Stock Could be a Solid ‘Buy’ in Today...
Monthly Newsletter Strategy
Download a free copy of our newsletter and see the details inside!
Hedge Fund Resource Center
Related News
Is Microsoft (MSFT) a Smart Long-term Buy? Microsoft vs Alphabet: You Won’t Believe This! 10 Most Profitable Companies in the World in 2020 Lessons From The First Tech Bubble Show The Need For New Strategies What to Do with Microsoft (MSFT) Stock? It’s Not Too Late to Buy Microsoft (MSFT) Stock Microsoft (MSFT) Is a Bargain Stock You Can Buy Today 10 Largest Silicon Producing Countries in the World Top 10 Best Performing Stock Markets Since 1900 Top 10 Most Valuable Automakers And Automobile Brands
Billionaire Hedge Funds