We know that hedge funds generate strong, risk-adjusted returns over the long run, therefore imitating the picks that they are collectively bullish on can be a profitable strategy for retail investors. With billions of dollars in assets, smart money investors have to conduct complex analyses, spend many resources and use tools that are not always available for the general crowd. This doesn’t mean that they don’t have occasional colossal losses; they do (like Peltz’s recent General Electric losses). However, it is still a good idea to keep an eye on hedge fund activity. With this in mind, as the current round of 13F filings has just ended, let’s examine the smart money sentiment towards Houghton Mifflin Harcourt Co (NASDAQ:HMHC).

Houghton Mifflin Harcourt Co (NASDAQ:HMHC) has seen an increase in enthusiasm from smart money in recent months. Our calculations also showed that HMHC isn’t among the 30 most popular stocks among hedge funds.

At the end of the first quarter, a total of 25 of the hedge funds tracked by Insider Monkey held long positions in this stock, a change of 32% from one quarter earlier. Below, you can check out the change in hedge fund sentiment towards HMHC over the last 15 quarters. So, let’s review which hedge funds were among the top holders of the stock and which hedge funds were making big moves. 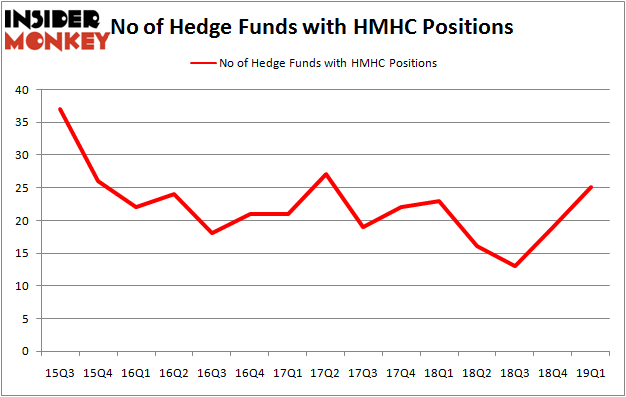 The largest stake in Houghton Mifflin Harcourt Co (NASDAQ:HMHC) was held by Anchorage Advisors, which reported holding $141.5 million worth of stock at the end of March. It was followed by Water Street Capital with a $60.1 million position. Other investors bullish on the company included Freshford Capital Management, Arrowstreet Capital, and Millennium Management.

With a general bullishness amongst the heavyweights, specific money managers have been driving this bullishness. Freshford Capital Management, managed by Michael Doheny, assembled the biggest position in Houghton Mifflin Harcourt Co (NASDAQ:HMHC). Freshford Capital Management had $10.9 million invested in the company at the end of the quarter. Peter Rathjens, Bruce Clarke and John Campbell’s Arrowstreet Capital also made a $7.4 million investment in the stock during the quarter. The other funds with new positions in the stock are Jim Simons’s Renaissance Technologies, David Costen Haley’s HBK Investments, and Michael Platt and William Reeves’s BlueCrest Capital Mgmt..

As you can see these stocks had an average of 10.75 hedge funds with bullish positions and the average amount invested in these stocks was $124 million. That figure was $248 million in HMHC’s case. BioCryst Pharmaceuticals, Inc. (NASDAQ:BCRX) is the most popular stock in this table. On the other hand Y-mAbs Therapeutics, Inc. (NASDAQ:YMAB) is the least popular one with only 4 bullish hedge fund positions. Compared to these stocks Houghton Mifflin Harcourt Co (NASDAQ:HMHC) is more popular among hedge funds. Our calculations showed that top 20 most popular stocks among hedge funds returned 1.9% in Q2 through May 30th and outperformed the S&P 500 ETF (SPY) by more than 3 percentage points. Unfortunately HMHC wasn’t nearly as popular as these 20 stocks and hedge funds that were betting on HMHC were disappointed as the stock returned -20.4% during the same period and underperformed the market. If you are interested in investing in large cap stocks with huge upside potential, you should check out the top 20 most popular stocks among hedge funds as 13 of these stocks already outperformed the market in Q2.