Hedge fund managers like David Einhorn, Bill Ackman, or Carl Icahn became billionaires through reaping large profits for their investors, which is why piggybacking their stock picks may provide us with significant returns as well. Many hedge funds, like Paul Singer’s Elliott Management, are pretty secretive, but we can still get some insights by analyzing their quarterly 13F filings. One of the most fertile grounds for large abnormal returns is hedge funds’ most popular small-cap picks, which are not so widely followed and often trade at a discount to their intrinsic value. In this article we will check out hedge fund activity in another small-cap stock: Hilton Grand Vacations Inc. (NYSE:HGV).

Hilton Grand Vacations Inc. (NYSE:HGV) has seen an increase in enthusiasm from smart money recently. Our calculations also showed that hgv isn’t among the 30 most popular stocks among hedge funds.

At the end of the first quarter, a total of 37 of the hedge funds tracked by Insider Monkey were bullish on this stock, a change of 32% from the previous quarter. By comparison, 37 hedge funds held shares or bullish call options in HGV a year ago. With the smart money’s positions undergoing their usual ebb and flow, there exists a select group of key hedge fund managers who were increasing their stakes significantly (or already accumulated large positions). 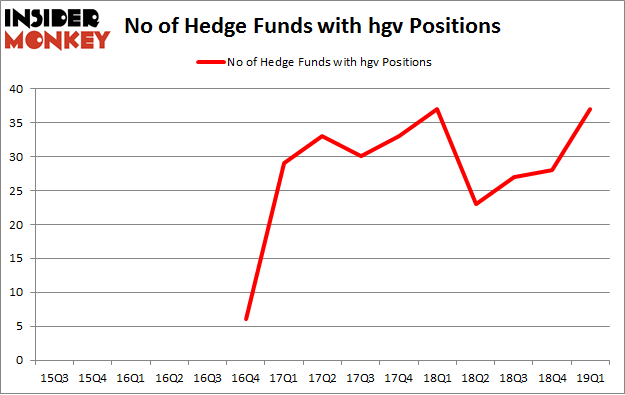 According to Insider Monkey’s hedge fund database, Long Pond Capital, managed by John Khoury, holds the number one position in Hilton Grand Vacations Inc. (NYSE:HGV). Long Pond Capital has a $181 million position in the stock, comprising 6.3% of its 13F portfolio. Sitting at the No. 2 spot is Claus Moller of P2 Capital Partners, with a $102.5 million position; the fund has 8.5% of its 13F portfolio invested in the stock. Some other professional money managers with similar optimism comprise Richard Mashaal’s Rima Senvest Management, Jeffrey Gates’s Gates Capital Management and Jonathon Jacobson’s Highfields Capital Management.