Delta Air Lines, Inc. (NYSE:DAL) investors should be aware of a decrease in enthusiasm from smart money recently. Our calculations also showed that DAL isn’t among the 30 most popular stocks among hedge funds.

What does the smart money think about Delta Air Lines, Inc. (NYSE:DAL)?

Heading into the second quarter of 2019, a total of 60 of the hedge funds tracked by Insider Monkey held long positions in this stock, a change of -18% from the previous quarter. The graph below displays the number of hedge funds with bullish position in DAL over the last 15 quarters. So, let’s examine which hedge funds were among the top holders of the stock and which hedge funds were making big moves. 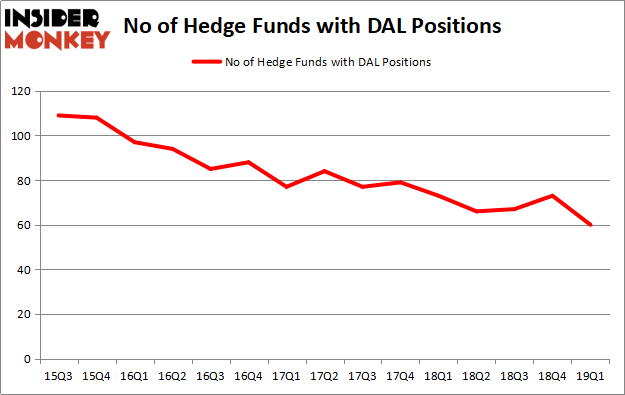 The largest stake in Delta Air Lines, Inc. (NYSE:DAL) was held by Berkshire Hathaway, which reported holding $3662.5 million worth of stock at the end of March. It was followed by Lansdowne Partners with a $999.1 million position. Other investors bullish on the company included PAR Capital Management, Two Sigma Advisors, and Millennium Management.

Since Delta Air Lines, Inc. (NYSE:DAL) has faced declining sentiment from hedge fund managers, it’s easy to see that there was a specific group of funds that slashed their positions entirely last quarter. Interestingly, Mike Masters’s Masters Capital Management dumped the biggest position of all the hedgies monitored by Insider Monkey, worth an estimated $99.8 million in stock. Anand Parekh’s fund, Alyeska Investment Group, also dropped its stock, about $52.2 million worth. These moves are intriguing to say the least, as aggregate hedge fund interest fell by 13 funds last quarter.

As you can see these stocks had an average of 40 hedge funds with bullish positions and the average amount invested in these stocks was $2470 million. That figure was $6467 million in DAL’s case. Activision Blizzard, Inc. (NASDAQ:ATVI) is the most popular stock in this table. On the other hand Sempra Energy (NYSE:SRE) is the least popular one with only 31 bullish hedge fund positions. Compared to these stocks Delta Air Lines, Inc. (NYSE:DAL) is more popular among hedge funds. Our calculations showed that top 20 most popular stocks among hedge funds returned 1.9% in Q2 through May 30th and outperformed the S&P 500 ETF (SPY) by more than 3 percentage points. Hedge funds were also right about betting on DAL as the stock returned 3.3% during the same period and outperformed the market by an even larger margin. Hedge funds were clearly right about piling into this stock relative to other stocks with similar market capitalizations.