We know that hedge funds generate strong, risk-adjusted returns over the long run, which is why imitating the picks that they are collectively bullish on can be a profitable strategy for retail investors. With billions of dollars in assets, professional investors have to conduct complex analyses, spend many resources and use tools that are not always available for the general crowd. This doesn’t mean that they don’t have occasional colossal losses; they do. However, it is still a good idea to keep an eye on hedge fund activity. With this in mind, let’s examine the smart money sentiment towards Booz Allen Hamilton Holding Corporation (NYSE:BAH) and determine whether hedge funds skillfully traded this stock.

Is Booz Allen Hamilton Holding Corporation (NYSE:BAH) the right pick for your portfolio? Investors who are in the know were getting less bullish. The number of long hedge fund bets were cut by 7 in recent months. Our calculations also showed that BAH isn’t among the 30 most popular stocks among hedge funds (click for Q1 rankings and see the video for a quick look at the top 5 stocks). BAH was in 27 hedge funds’ portfolios at the end of March. There were 34 hedge funds in our database with BAH holdings at the end of the previous quarter.

At the moment there are a multitude of formulas stock traders employ to value their stock investments. Some of the less utilized formulas are hedge fund and insider trading interest. Our experts have shown that, historically, those who follow the top picks of the best investment managers can outclass the broader indices by a very impressive amount (see the details here).

At Insider Monkey we scour multiple sources to uncover the next great investment idea. There is a lot of volatility in the markets and this presents amazing investment opportunities from time to time. For example, this trader claims to deliver juiced up returns with one trade a week, so we are checking out his highest conviction idea. A second trader claims to score lucrative profits by utilizing a “weekend trading strategy”, so we look into his strategy’s picks. We read hedge fund investor letters and listen to stock pitches at hedge fund conferences. Hedge fund sentiment towards Tesla reached its all time high at the end of 2019 and Tesla shares more than tripled this year. We are trying to identify other EV revolution winners, so we are checking out this tiny lithium stock. Keeping this in mind let’s check out the fresh hedge fund action regarding Booz Allen Hamilton Holding Corporation (NYSE:BAH). 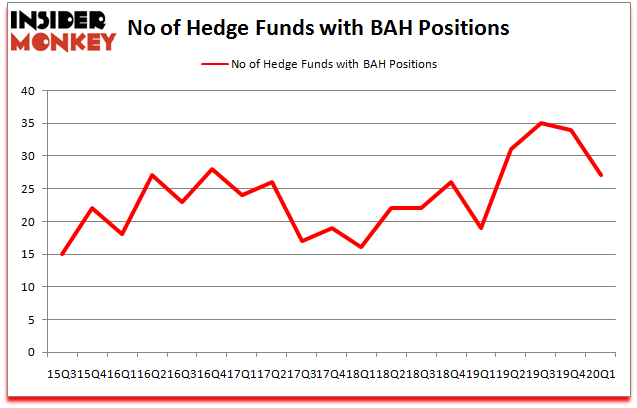 More specifically, AQR Capital Management was the largest shareholder of Booz Allen Hamilton Holding Corporation (NYSE:BAH), with a stake worth $91.4 million reported as of the end of September. Trailing AQR Capital Management was Two Sigma Advisors, which amassed a stake valued at $45 million. Renaissance Technologies, Millennium Management, and Adage Capital Management were also very fond of the stock, becoming one of the largest hedge fund holders of the company. In terms of the portfolio weights assigned to each position Game Creek Capital allocated the biggest weight to Booz Allen Hamilton Holding Corporation (NYSE:BAH), around 5.15% of its 13F portfolio. Lunia Capital is also relatively very bullish on the stock, designating 1.48 percent of its 13F equity portfolio to BAH.

Since Booz Allen Hamilton Holding Corporation (NYSE:BAH) has faced falling interest from hedge fund managers, it’s safe to say that there were a few fund managers who were dropping their full holdings last quarter. Interestingly, Peter Rathjens, Bruce Clarke and John Campbell’s Arrowstreet Capital dropped the biggest stake of the 750 funds monitored by Insider Monkey, worth close to $23.1 million in stock, and Dmitry Balyasny’s Balyasny Asset Management was right behind this move, as the fund sold off about $22.2 million worth. These moves are intriguing to say the least, as total hedge fund interest dropped by 7 funds last quarter.

As you can see these stocks had an average of 28 hedge funds with bullish positions and the average amount invested in these stocks was $433 million. That figure was $276 million in BAH’s case. Masco Corporation (NYSE:MAS) is the most popular stock in this table. On the other hand Agnico Eagle Mines Limited (NYSE:AEM) is the least popular one with only 25 bullish hedge fund positions. Booz Allen Hamilton Holding Corporation (NYSE:BAH) is not the least popular stock in this group but hedge fund interest is still below average. This is a slightly negative signal and we’d rather spend our time researching stocks that hedge funds are piling on. Our calculations showed that top 10 most popular stocks among hedge funds returned 41.4% in 2019 and outperformed the S&P 500 ETF (SPY) by 10.1 percentage points. These stocks gained 12.3% in 2020 through June 30th and surpassed the market by 15.5 percentage points. Unfortunately BAH wasn’t nearly as popular as these 10 stocks (hedge fund sentiment was quite bearish); BAH investors were disappointed as the stock returned 13.8% during the second quarter and underperformed the market. If you are interested in investing in large cap stocks with huge upside potential, you should check out the top 10 most popular stocks among hedge funds as most of these stocks already outperformed the market in 2020.