The latest 13F reporting period has come and gone, and Insider Monkey have plowed through 821 13F filings that hedge funds and well-known value investors are required to file by the SEC. The 13F filings show the funds’ and investors’ portfolio positions as of March 31st, a week after the market trough. Now, we are almost done with the second quarter. Investors decided to bet on the economic recovery and a stock market rebound. S&P 500 Index returned almost 20% this quarter. In this article you are going to find out whether hedge funds thoughtColony Capital Inc (NYSE:CLNY) was a good investment heading into the second quarter and how the stock traded in comparison to the top hedge fund picks.

Colony Capital Inc (NYSE:CLNY) has seen a decrease in hedge fund sentiment of late. CLNY was in 18 hedge funds’ portfolios at the end of March. There were 25 hedge funds in our database with CLNY positions at the end of the previous quarter. Our calculations also showed that CLNY isn’t among the 30 most popular stocks among hedge funds (click for Q1 rankings and see the video for a quick look at the top 5 stocks).

At Insider Monkey we scour multiple sources to uncover the next great investment idea. Cannabis stocks are roaring back in 2020, so we are checking out this under-the-radar stock. We go through lists like the 10 most profitable companies in America to pick the best large-cap stocks to buy. Even though we recommend positions in only a tiny fraction of the companies we analyze, we check out as many stocks as we can. We read hedge fund investor letters and listen to stock pitches at hedge fund conferences. If you want to find out the best healthcare stock to buy right now, you can watch our latest hedge fund manager interview here. Keeping this in mind let’s take a look at the latest hedge fund action encompassing Colony Capital Inc (NYSE:CLNY).

What have hedge funds been doing with Colony Capital Inc (NYSE:CLNY)?

At Q1’s end, a total of 18 of the hedge funds tracked by Insider Monkey held long positions in this stock, a change of -28% from one quarter earlier. The graph below displays the number of hedge funds with bullish position in CLNY over the last 18 quarters. With hedge funds’ positions undergoing their usual ebb and flow, there exists a few key hedge fund managers who were adding to their holdings meaningfully (or already accumulated large positions). 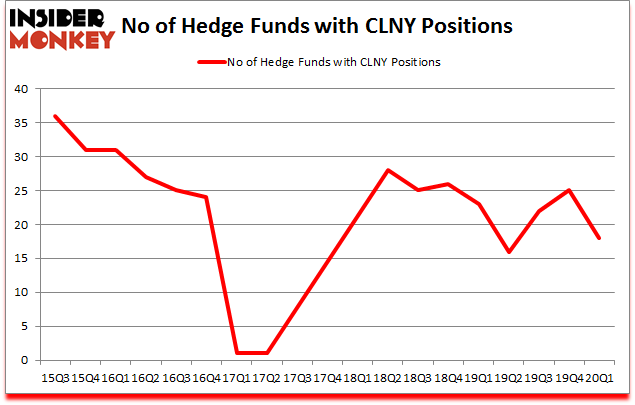 Of the funds tracked by Insider Monkey, Baupost Group, managed by Seth Klarman, holds the most valuable position in Colony Capital Inc (NYSE:CLNY). Baupost Group has a $87 million position in the stock, comprising 1.3% of its 13F portfolio. Coming in second is Renaissance Technologies,  holding a $12 million position; the fund has less than 0.1%% of its 13F portfolio invested in the stock. Remaining peers that hold long positions comprise Ken Griffin’s Citadel Investment Group, Mubadala Investment’s MIC Capital Partners and Crispin Odey’s Odey Asset Management Group. In terms of the portfolio weights assigned to each position MIC Capital Partners allocated the biggest weight to Colony Capital Inc (NYSE:CLNY), around 2.73% of its 13F portfolio. Baupost Group is also relatively very bullish on the stock, dishing out 1.28 percent of its 13F equity portfolio to CLNY.

Seeing as Colony Capital Inc (NYSE:CLNY) has experienced falling interest from the entirety of the hedge funds we track, it’s safe to say that there was a specific group of money managers that slashed their full holdings by the end of the first quarter. Interestingly, Martin Whitman’s Third Avenue Management dropped the biggest stake of the “upper crust” of funds followed by Insider Monkey, worth an estimated $8.6 million in stock, and J. Alan Reid, Jr.’s Forward Management was right behind this move, as the fund sold off about $7.7 million worth. These transactions are important to note, as total hedge fund interest dropped by 7 funds by the end of the first quarter.

As you can see these stocks had an average of 13.5 hedge funds with bullish positions and the average amount invested in these stocks was $73 million. That figure was $127 million in CLNY’s case. Adient plc (NYSE:ADNT) is the most popular stock in this table. On the other hand Omega Flex, Inc. (NASDAQ:OFLX) is the least popular one with only 3 bullish hedge fund positions. Colony Capital Inc (NYSE:CLNY) is not the most popular stock in this group but hedge fund interest is still above average. This is a slightly positive signal but we’d rather spend our time researching stocks that hedge funds are piling on. Our calculations showed that top 10 most popular stocks among hedge funds returned 41.4% in 2019 and outperformed the S&P 500 ETF (SPY) by 10.1 percentage points. These stocks gained 18.6% in 2020 through July 27th but beat the market by 17.1 percentage points. Unfortunately CLNY wasn’t nearly as popular as these 10 stocks and hedge funds that were betting on CLNY were disappointed as the stock returned 2.9% during the same time period and underperformed the market. If you are interested in investing in large cap stocks with huge upside potential, you should check out the top 10 most popular stocks among hedge funds as many of these stocks already outperformed the market so far this year.