Were Hedge Funds Right About Betting On Starbucks Corporation (SBUX)?

We at Insider Monkey have gone over 821 13F filings that hedge funds and prominent investors are required to file by the SEC The 13F filings show the funds’ and investors’ portfolio positions as of March 31st, near the height of the coronavirus market crash. We are almost done with the second quarter. Investors decided to bet on the economic recovery and a stock market rebound. S&P 500 Index returned almost 20% this quarter. In this article we look at how hedge funds traded Starbucks Corporation (NASDAQ:SBUX) and determine whether the smart money was really smart about this stock.

Starbucks Corporation (NASDAQ:SBUX) investors should pay attention to an increase in enthusiasm from smart money lately. SBUX was in 68 hedge funds’ portfolios at the end of the first quarter of 2020. There were 66 hedge funds in our database with SBUX positions at the end of the previous quarter. Our calculations also showed that SBUX isn’t among the 30 most popular stocks among hedge funds (click for Q1 rankings and see the video for a quick look at the top 5 stocks). 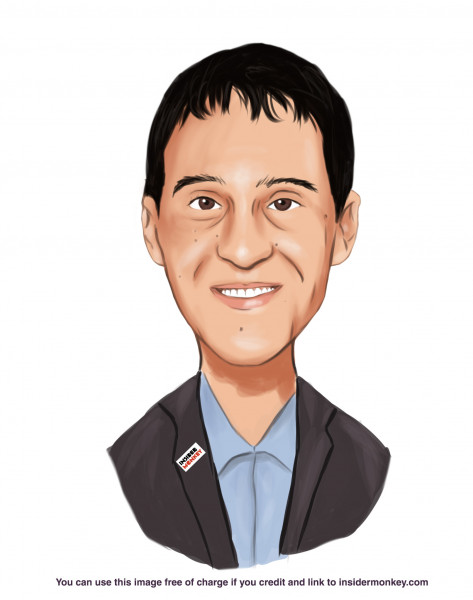 At Insider Monkey we scour multiple sources to uncover the next great investment idea. There is a lot of volatility in the markets and this presents amazing investment opportunities from time to time. For example, this trader claims to deliver juiced up returns with one trade a week, so we are checking out his highest conviction idea. A second trader claims to score lucrative profits by utilizing a “weekend trading strategy”, so we look into his strategy’s picks. We read hedge fund investor letters and listen to stock pitches at hedge fund conferences. We recently recommended several stocks partly inspired by legendary Bill Miller’s investor letter. Our best call in 2020 was shorting the market when the S&P 500 was trading at 3150 in February after realizing the coronavirus pandemic’s significance before most investors. Keeping this in mind let’s take a look at the latest hedge fund action encompassing Starbucks Corporation (NASDAQ:SBUX).

How have hedgies been trading Starbucks Corporation (NASDAQ:SBUX)?

At Q1’s end, a total of 68 of the hedge funds tracked by Insider Monkey held long positions in this stock, a change of 3% from the previous quarter. Below, you can check out the change in hedge fund sentiment towards SBUX over the last 18 quarters. With hedgies’ capital changing hands, there exists an “upper tier” of notable hedge fund managers who were upping their holdings significantly (or already accumulated large positions). 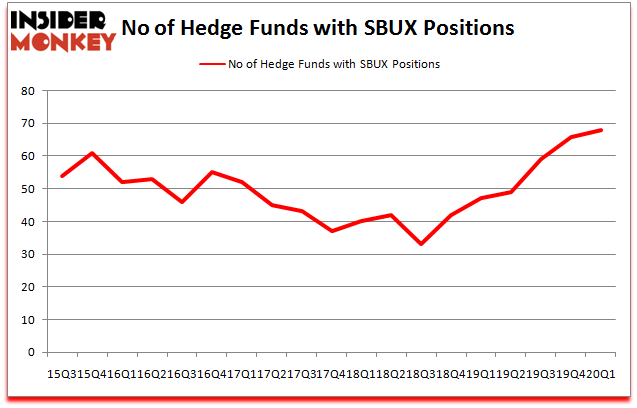 The largest stake in Starbucks Corporation (NASDAQ:SBUX) was held by Pershing Square, which reported holding $666 million worth of stock at the end of September. It was followed by Cedar Rock Capital with a $554.3 million position. Other investors bullish on the company included D E Shaw, Fisher Asset Management, and Two Sigma Advisors. In terms of the portfolio weights assigned to each position Cedar Rock Capital allocated the biggest weight to Starbucks Corporation (NASDAQ:SBUX), around 14.83% of its 13F portfolio. Pacifica Capital Investments is also relatively very bullish on the stock, dishing out 14.78 percent of its 13F equity portfolio to SBUX.

As one would reasonably expect, key hedge funds were leading the bulls’ herd. BlueSpruce Investments, managed by Tim Hurd and Ed Magnus, created the largest position in Starbucks Corporation (NASDAQ:SBUX). BlueSpruce Investments had $157.1 million invested in the company at the end of the quarter. Eashwar Krishnan’s Tybourne Capital Management also made a $86.3 million investment in the stock during the quarter. The following funds were also among the new SBUX investors: Aaron Cowen’s Suvretta Capital Management, Michael Blitzer’s Kingstown Capital Management, and Daniel Sundheim’s D1 Capital Partners.

As you can see these stocks had an average of 40.5 hedge funds with bullish positions and the average amount invested in these stocks was $2489 million. That figure was $3229 million in SBUX’s case. Fidelity National Information Services Inc. (NYSE:FIS) is the most popular stock in this table. On the other hand Diageo plc (NYSE:DEO) is the least popular one with only 17 bullish hedge fund positions. Starbucks Corporation (NASDAQ:SBUX) is not the most popular stock in this group but hedge fund interest is still above average. This is a slightly positive signal but we’d rather spend our time researching stocks that hedge funds are piling on. Our calculations showed that top 10 most popular stocks among hedge funds returned 41.4% in 2019 and outperformed the S&P 500 ETF (SPY) by 10.1 percentage points. These stocks gained 13.3% in 2020 through June 25th but beat the market by 16.8 percentage points. Unfortunately SBUX wasn’t nearly as popular as these 10 stocks and hedge funds that were betting on SBUX were disappointed as the stock returned 13% during the same time period and underperformed the market. If you are interested in investing in large cap stocks with huge upside potential, you should check out the top 10 most popular stocks among hedge funds as many of these stocks already outperformed the market so far this year.