Have you read the jobs report published by the Department of Labor Statistics earlier this month? If you haven’t, you should. And if you have, you should be very nervous.

A brief timeline
To get to the future, we have to start in the past. First, the Great Recession happened. Everything crumbled, and for a time, we thought the world as we knew it was ending. I trust we’re all familiar with this story by now.

Then the government intervened. There were massive stimulus efforts, companies bailed out, banks forced to accept capital; there was “Cash for Clunkers,” and interest rates bottomed out effectively at zero. Left in the rubble was 10% unemployment, negative GDP growth, and the very real threat of deflation.

Since then,3 the country has calmed. The financial world is no longer hanging over the precipice. Government programs have wound down. The Treasury Department has steadily sold its positions in bailed out companies. Unemployment has gradually improved to where it stands today, at 7.4%. 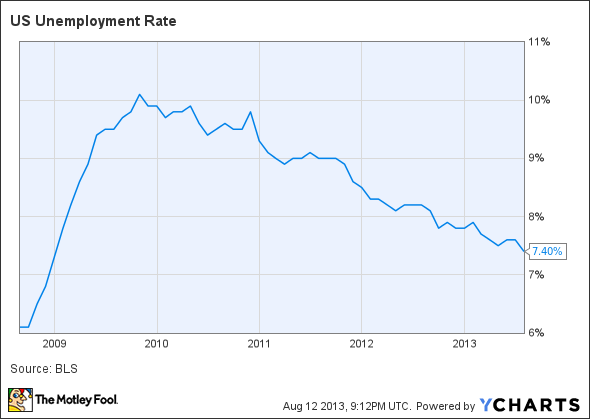 US Unemployment Rate data by YCharts.

The Fed’s bond buying, Quantitative Easing, and other soirees into the world of artificially low interest rates have not, as of yet, abated.

But that is about to change, and over the next six months, the interest rate dialogue will dominate the financial world. It will impact banks, consumers, governments, and businesses alike.

And once mortgage rates and auto rates and business loan rates all return to more historically normal levels, what happens next? Does the economy have the horsepower to continue the recovery?

Cheap monetary policy was fundamentally about stoking this demand to get the economy moving again. And, by and large, it seems to have worked.

But in six or 12 or 18 months, when there isn’t any more cheap money, the economy will once again rely on the demand side to fuel growth. And that’s why 7.4% unemployment makes me nervous.

More than four million Americans are currently considered long-term unemployed, and the unemployment rate for American youth is a staggering 24%. In July alone, the labor force shrank by 37,000 individuals, a troubling indication of the struggle for the American public to fully reengage in the economy. Workers earned less money on average in July because companies simultaneously cut hours and lowered hourly pay. 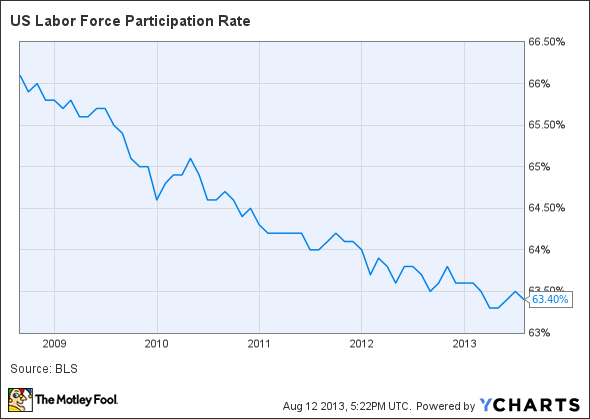 Fools, this is not a picture of robust consumer demand. The economy did add a net of just north of 160,000 jobs in July, and that is certainly positive news. However, it’s simply not strong enough to sustain the economy without the Federal Reserve’s interest rate accommodations.

Banks are on the front lines
Every bank in the country, large or small, sell products where the price is directly correlated to the prevailing market interest rates. If rates rise, their clients must now be willing to pay more for the cash they want to borrow. To be successful, the underlying economy must be sufficiently strong to justify this higher cost of capital — be it for a business loan, car loan, or home purchase.