“…a blindfolded monkey throwing darts at a newspaper’s financial pages could select a portfolio that would do just as well as one carefully selected by experts.“

Hopefully Burt doesn’t expect us to take such a statement seriously.  I mean, like anyone could even know that anyways.  The only way to prove such a statement would be to replicate such a situation…which just happens to be what some have done.

The Wall Street Journal created the dart board contest in 1988.  The staffers were the monkeys (the humor of which is not lost) and they threw darts at a newspaper.  In 100 different contests, they tested the dartboard stocks against the professionally picked stocks.  The professionals won 61 times.  Hooray!  But wait a minute…that means that the monkeys won 39 times.

Similarly, Research Affiliates has studied this scenario from 1964-2010 and found that the monkey stocks outperformed the market by an average 1.7%.

Isn’t it interesting that there are a lot of people who’s full time job is to analyze stocks?  They all look at the same companies, the same products, the same potential, and the same numbers, and yet can come to very different conclusions.  The monkey test seems to prove that there must not be anything concrete about picking stocks.  Its completely arbitrary.  It’s nothing but the luck of rolling a 7.  Or it’s the dumb luck of getting stuck with the Old Maid card.

That conclusion would ignore the fact that there are people who consistently outperform their peers.  Warren Buffett, Peter Lynch, and George Soros are just a couple of names that come to mind.  Somehow, these guys have some sort of insight beyond the tangibles that everyone else has.  They don’t hold the proverbial crystal ball, but maybe they are looking for something more than we are.  So what can we learn from the greats?

“Be greedy when others are fearful.“

This must be the most often quoted thing that Buffett ever said.  Practicing what he preaches, Buffett continues to add to his position in Wells Fargo & Co (NYSE:WFC).  Many people are still fearful of the banking sector.  One needs only look at what has been going on in Cyprus these days to be reminded that there are still major global financial concerns.  Some wonder if the recovery we have experienced these last couple of years is even real at all, or just a game some Wall Street tycoons are playing. 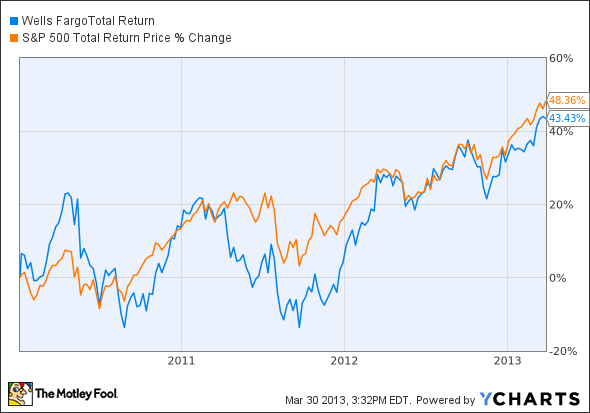 Over the last three years, Wells Fargo & Co (NYSE:WFC) hasn’t quite kept up with the S&P 500.  This might cause one to question Mr. Buffett’s advice and logic in this particular case.  But 43% is nothing to sneeze at, and there might be another metric that will prove relevant here. 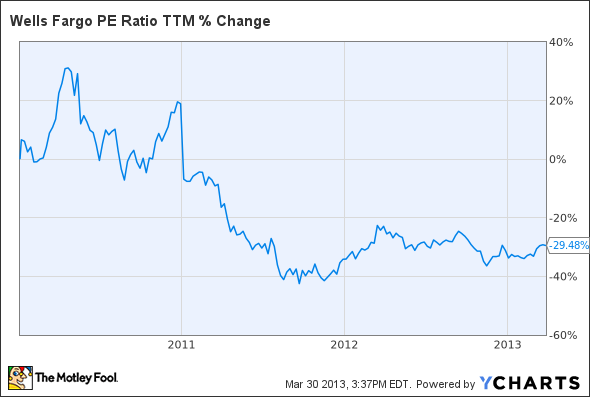 While Wells Fargo & Co (NYSE:WFC)’s total return has risen over 40% in the last 3 years, we see that their valuation hasn’t kept up with earnings.  Their price to earnings ratio is down nearly 30% during that same period.  This suggests that Buffett isn’t as crazy as he seems, and there may still be something left here for value investors.