The claim that actions speak louder than words doesn’t apply if you’re the chairman of the Federal Reserve. Alan Greenspan learned this lesson in the midst of the dot-com bubble, and now Ben Bernanke has his own first-hand experience with it.

In a speech before the American Enterprise Institute on December 5, 1996, then-Fed chairman Greenspan asked rhetorically [emphasis added]: “How do we know when irrational exuberance has unduly escalated asset values, which then become subject to unexpected and prolonged contractions as they have in Japan over the past decade?”

The utterance was followed by a slump in global stock markets — though they recovered soon thereafter.

Bernanke’s moment came in the latter half of last month. During testimony before the Congressional Joint Economic Committee, Bernanke responded to a question about the end of QE3 by saying that “in the next few meetings, we could take a step down in our pace of purchases” of long-term Treasuries and mortgage-backed securities.

Since then, here’s what’s happened to mortgage rates: 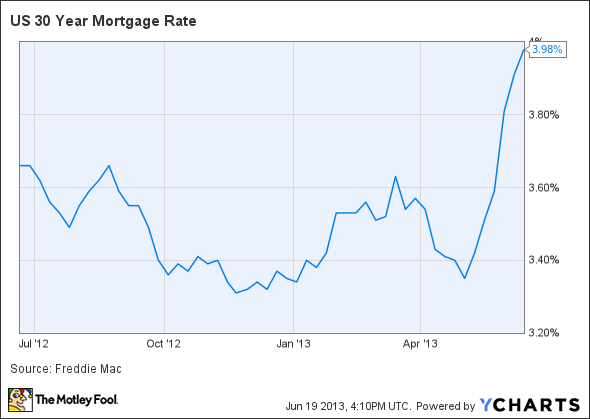 But while Greenspan and Bernanke’s comments both evoked responses in asset prices, the lessons from the experiences are diametrically opposed.

With the benefit of hindsight, Greenspan should have done more to stop the inflation of stocks leading up to the dot-com bubble and crash. Under his watch, the Fed primarily assisted on the back end, lowering interest rates after the crash occurred; economists and commentators have since draw a line between the resulting low interest rates and the subsequent housing bubble.

Meanwhile, Bernanke’s comments came in the context of an incipient recovery. And one could argue that they were being offered merely to nullify political opposition to the central bank’s easy-money policies, which, mind you, have arguably single-handedly propped up our otherwise ailing economy over the past three years.

This aside, the fact remains that the Fed appears eager to at least signal a drawdown in its third round of quantitative easing. And the question now is: What will be the impact?

The most specific effects will be felt by the banking sector, and particularly lenders that look to the mortgage market for a significant portion of their business. The three banks that come to mind immediately are Wells Fargo & Co (NYSE:WFC), JPMorgan Chase & Co. (NYSE:JPM), and Bank of America Corp (NYSE:BAC). In the first quarter of this year, these were the country’s three largest mortgage originators, underwriting nearly $190 billion worth of mortgages combined — Wells Fargo & Co (NYSE:WFC) alone accounted for $109 billion of those. The saving grace could be the fact that higher interest rates, while driving down mortgage business, will concomitantly increase their yield on earning assets, and thereby their interest rate spread. But whether these will counteract each other remains to be seen.