In April last year, Starboard Value’s Jeff Smith discussed in a CNBC interview his opinions on the changes that Newell Brands (NASDAQ:NWL) was going through during April 2018, and emphasized the potential of Starboard Value’s investment in the company. Newell Brands was undergoing a sales drop of 55% in 2017, and the plan was to reorganize the company’s management board in order to improve the company’s business. In this article, we are going to take a look at what Jeff Smith said, and what has happened in the meantime.

Newell Brands, a company that produces a plethora of consumer and commercial products, acquired Jarden Corporation, a consumer products company, for $16 billion, back in April 2016. Two years afterward Martin Franklin, co-founder and former director of Jarden Corporation, left the Newell Brands’ board seat since he intended to become the board leader and wanted to introduce Jarden’s team which would run Newell Brands. This was not supported by the majority of board members. Hence, the company needed some new operational and leadership improvements, and for this reason, Starboard Value was seeking four board seats. Even though the company has lost $10 billion since the merger and its trade started declining from that period, Jeff Smith believed that it is a great company with incredible value, especially for its iconic brands such as Sharpie, Elmer’s Glue, and Paper Mate, and that was extremely undervalued.

Having Starboard Value on one side and Carl Icahn’s hedge fund on the other, Newell Brands decided to make the agreement with Carl Icahn, the Chairman of Icahn Enterprises, LP, to take over the five board seats, since he showed up with $1 billion worth of stock, which is 6% of the company. Jeff Smith argued that this was not a good move by the company. He emphasized that the company needed the independent board seat with only one or two shareholder representatives. In the case of Icahn, the board got five people, of which four are representatives, including his son, son’s colleague and trader portfolio manager, which does not bring much independence to the board. Furthermore, Smith held the opinion that this was not good for the shareholders as well.

Later on, at the end of April 2018, a new agreement was made when Icahn was asked to give up two board seats in favor of Starboard, which, in Jeff Smith’s view should have brought significant improvements in the company’s operational transformation. By May, Starboard Value held around 3.8% beneficial ownership of Newell Brands’ shares.

However, since April 2018 the situation has been worsening in Newell Brands, and its stock price was going down, reaching its lowest trade of $15.40 on October 29th. During November the stock recovered by 8% when Christopher Peterson was announced as the new Chief Financial Officer. But this was just a brief positive turnaround – overall, the stock lost 40% over the past 12 months, and on March 18th it had a closing price of $15.98. For the fourth quarter of 2018, Newell Brands reported net sales from continuing operations of $2.3 billion, compared to $2.5 billion in the same period of 2017. It also disclosed EPS for the total company of $0.46, versus EPS of $3.38 in Q4 of 2017. The company deployed $2.6 billion to debt repayment, $996 million to share repurchases, and $102 million to dividends.

Was Jeff Smith wrong about this stock completely or maybe he was just wrong about the timing? Is it now a better time to invest in it, with its price being much lower than in April 2018?

Well, Jeff Smith started losing faith in the company during the third quarter of 2018, when his Starboard Value lowered its stake by 92% to 787,384 shares, with a value of $15.98 million. In the following quarter, it completely gave up on the company, selling its entire position.

What about Carl Icahn? In case of Icahn Capital LP, during the fourth quarter of 2018, the fund actually raised its stake in it by 7% to 41.12 million shares, which were valued $764.42 million, amassing for 3.74% of its equity portfolio.

At Q4’s end, a total of 30 of the hedge funds tracked by Insider Monkey were long this stock, a change of -17% from one quarter earlier. By comparison, 30 hedge funds held shares or bullish call options in NWL a year ago. 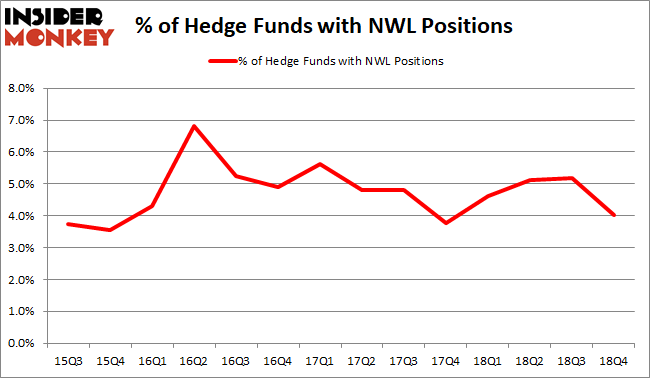 When looking at the institutional investors followed by Insider Monkey, Icahn Capital LP, managed by Carl Icahn, holds the number one position in Newell Brands Inc. (NYSE:NWL). Icahn Capital LP has a $764.4 million position in the stock, comprising 3.7% of its 13F portfolio. On Icahn Capital LP’s heels is Richard S. Pzena of Pzena Investment Management, with a $340.3 million position; 2% of its 13F portfolio is allocated to the stock. Remaining members of the smart money that hold long positions contain Israel Englander’s Millennium Management, Charles Lemonides’s Valueworks LLC and Ken Griffin’s Citadel Investment Group.

Due to the fact that Newell Brands Inc. (NYSE:NWL) has faced falling interest from the smart money, it’s easy to see that there lies a certain “tier” of hedge funds that slashed their full holdings by the end of the third quarter. Interestingly, Larry Robbins’s Glenview Capital cut the biggest stake of the “upper crust” of funds followed by Insider Monkey, totaling close to $393.7 million in stock.

Overall, though, NWL is still very popular among hedge funds. Similarly valued stocks have lower number of hedge funds with bullish position. However, we believe, Newell is potentially a value trap and we definitely don’t recommend a long position. Our proprietary algorithms hasn’t flagged it as a short candidate yet, so we wouldn’t short it either. There are just better stocks to go long and short.