Companies 0 See All
Hedge Funds 0 See All
Insiders 0 See All
Institutional Investors 0 See All
Click here to see all results for Sorry, no results has been found matching your query.
Dividend Stocks-News-Stock Analysis-Tech

The Oracle of Omaha has invested in another tech company. This is only Buffett’s 2nd large technology company investment. The first came in 2011.

Buffett has famously (prior to 2011) avoided tech stocks. When asked in the late 1990’s if he was (at the time) investing in technology stocks, Warren Buffett said the following:

“The answer is no, and it’s probably unfortunate. I don’t know what that world will look like in 10 years, and I don’t want to play in a game where the other guy has an advantage over me.”

Buffett appears to have studied up on technology stocks since the late 1990’s. It is interesting to note that he only invested in International Business Machines Corp (IBM) when it:

1. Traded at a low price-to-earnings multiple

His recent investment in Apple Inc. (NASDAQ:AAPL) follows the same pattern. Apple is currently trading for a price-to-earnings ratio of 10.5, has a 2.4% dividend yield, and a $175 billion (yes, you read that right) share repurchase program in place.

Buffett will join 133 other investors in Insider Monkey’s database which were long Apple on December 31. Those investors held $17.72 billion worth of the company’s shares at that time, which only amounted to 3.0% of its float. There appears to have been a big move into Apple during the first quarter as its shares become even more attractive from a valuation perspective throughout the first two months of the year. We count 32 hedge funds as taking up new long positions in the stock during the quarter, while 21 closed sold out of their previous holdings. That could vault Apple back into the top-5 most owned stocks among the funds in our database, after it fell to sixth at the end of 2015. 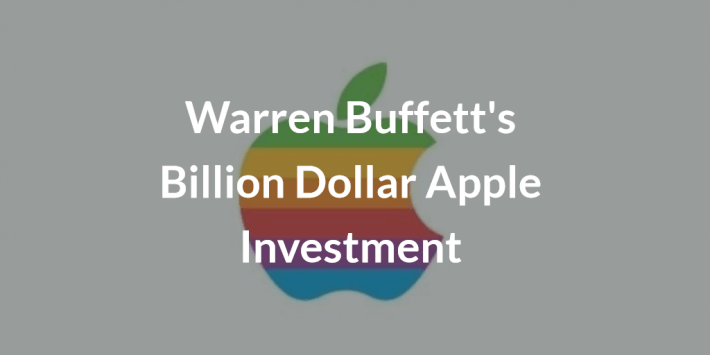 Did Buffett Really Invest in Apple?

There’s no doubt that Buffett was behind the International Business Machines Corp (IBM) investment. It makes up nearly 10% of his portfolio.

In Buffett’s 2015 annual report, he gave an update about the control both Todd Combs and Ted Weschler have over Berkshire’s (BRK.B) portfolio:

“Todd (Combs) and Ted Weschler are primarily investment managers – they each handle about $9 billion for us – both of them cheerfully and ably add major value to Berkshire in other ways as well. Hiring these two was one of my best moves.”

With a combined portfolio value of around $18 billion, it is conceivable that the Apple investment came from one or both of Ted Weschler and Todd Combs.

Regardless, Berkshire Hathaway has invested around a bit over $1 billion into Apple stock. This makes up around 0.8% of Berkshire’s total portfolio.