Warren Buffett recently said the worst mistake he ever made was buying New England textile business “Berkshire Hathaway” in 1962.

Perhaps that was his worst mistake, but we think something else is Warren Buffett‘s biggest mistake.

He started his career as a hedge fund manager by charging his clients a 25% performance fee above a 6% threshold. The arrangement helped him accumulate 24% of his hedge fund’s assets in 13 years. Later, he stopped the fee schedule and began to work virtually for free for his clients. If one considers that portfolio size actually drags on performance, Warren Buffett may have essentially paid out of pocket to manage other people’s money.

But that’s not the biggest mistake he ever made. He essentially prevented $100 Billion of his own net worth from being donated to the public.

Warren Buffet was a hedge fund manager with over 32% annual returns and 19% annual alpha between 1957 and 1968. He generated that alpha by working hard. He was due his fair share for that. Meanwhile, Warren Buffett’s investors weren’t penniless either; they were millionaires who owed most of their wealth to Buffett.

A hedge fund manager is technically a laborer. Economic calculations show that the historical average share of labor in economic output is about one-third. The remaining two-thirds belongs to the capitalists. So, it would be quite normal for a hedge fund manager to demand one third of the profits for his labor. Since the market wasn’t so competitive in the early 60’s, Buffett may have been able to demand more than a third, considering his investors probably had no better alternative.

Insider Monkey, your source for free insider trading data, calculated Warren Buffett’s hypothetical earnings if he were to have charged a 25% performance fee above a 6% threshold. We also assumed a high-water mark, i.e., Warren Buffett would not start collecting performance fees until he recoups his losses from previous years. For example, in 1958 the Dow Jones returned 38.5% and Buffett’s hedge fund returned 40.9%. After excluding the 6 percentage points (the threshold) of the 40.9% return, we are left with 34.9% of return that is subject to the performance fee. Twenty-five percent of the 34.9% goes to Warren Buffett for his services, which is 8.725 percentage points. So Buffett’s clients would have gotten a net return of 32.175%. This is what Buffett meant when he was criticizing hedge fund managers for charging fees when the markets are rising. Buffett had an average alpha of 19% between 1957 and 1968. This means that he owed 21.9 percentage points of the 40.9% return to the overall rise in the market. In one sense, he was criticizing what he did 50 years ago. 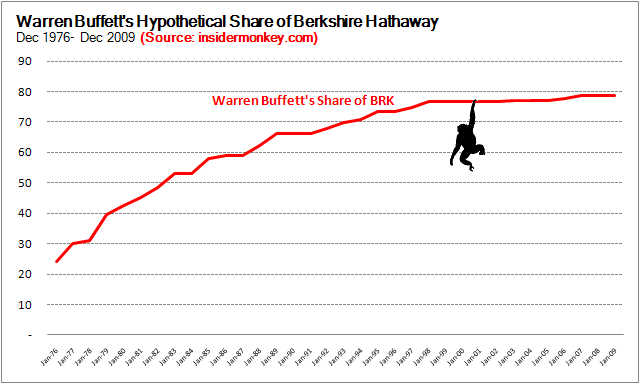 Warren Buffett supports the notion that the extremely wealthy (people like he) should donate most of their wealth to serve the greater good. But by working for free for nearly 33 years, he saved his wealthy clients nearly $100 Billion, the same $100 Billion that he could have donated as part of his master (and truly genius) plan.  That’s Warren Buffett’s biggest mistake ever.

3 Reasons Why Dumb Money Was Right This Time