The market has taken on a sickly tone in recent weeks, but it’s important to remember that the S&P 500 and the Dow Jones Industrial Average are still within 10% of their multi-year highs. Yet a number of stocks have entered into their own personal bear market, breaching 52-week lows or, in some instances, multi-year lows.

Counterintuitively, the weakest stocks in this market are starting to offer some of the most compelling opportunities, as they stand a chance to retake lost ground if the market stops falling. A stabilized market brings out fresh buyers in search of newly-created value.

Here’s a look at 13 stocks that have either hit 52-week lows or have approached them in recent days, but still look very well-positioned for a rebound in the next 12-18 months. 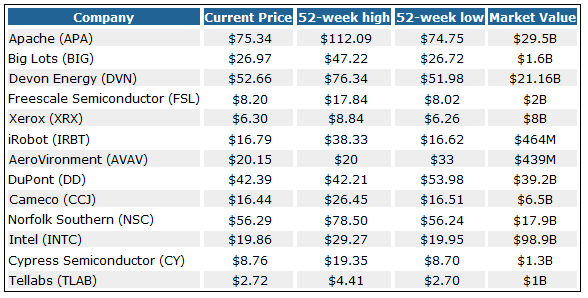 The Buffett proxy
When Warren Buffett‘s Berkshire Hathaway Inc. (NYSE:BRK.A) announced plans in late 2009 to acquire railroad firm Burlington Northern Santa Fe, it was quickly seen as a savvy move. After all, railroad operators have sharpened their game during the past half-decade and now operate much more efficiently than in the past, which has enabled them to produce prodigious cash flow.

Investors could see such a strengthening profit picture in rival Norfolk Southern Corp. (NYSE:NSC) as well, which posted a record $3.2 billion in operating profit in 2011. This translates into 28.7% operating margins, which is also a company record. 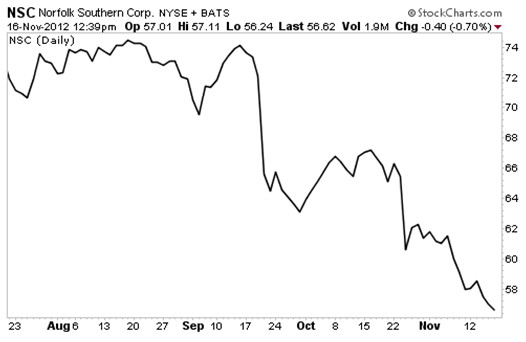 Yet concerns about a possible slowdown in rail traffic in 2013 are pushing shares down to a level that Buffett would surely find attractive. He’s known for seizing on stocks that trade lower, even as they have a wide long-term moat around their business.

The chip slump
Semiconductor stocks are taking it on the chin these days, as analysts anticipate a lackluster demand backdrop for semis in the year ahead. Yet the precise time to buy this highly-cyclical group is when they have fallen out of favor and their valuations sharply discount the rebound that will likely emerge before we reach mid-decade.

So when you see solid industry players such as Intel Corporation (NASDAQ:INTC), Cypress Semiconductor Corporation (NASDAQ:CY), Freescale Semiconductor Ltd (NYSE:FSL) and others fall far from their highs, you need to pay attention as compelling values start to emerge. Take Intel, for example. The industry’s biggest player has generated at least $15 billion in operating cash flow in each of the past two years, yet now sports an enterprise value of just $90 billion. At six times trailing cash flow, the stock will likely turn out to be quite the bargain if you stick around until the chip cycle turns back up.

Freescale Semiconductor also has good catalysts, thanks to a recently announced restructuring. The company’s new CEO, Gregg Lowe, plans to cut costs, reinvest the savings in the chip maker’s highest-margin segments and sell divisions that are focused outside the company’s core auto and industrial markets. He also plans to shed debt, which has been a key millstone for the stock. Goldman Sachs sees more than 50% upside to its $12.50 price target, adding that Freescale is “our favorite idea for investors with high risk tolerance tocapitalize on what we believe will be a solid supply-driven 2013 recovery.”

The energy players
There are ample opportunities to speculate on small, off-the-radar energy producers, but these days, there’s a fresh opening for a pair of industry blue chips: Devon Energy Corporation (NYSE:DVN) and Apache Corporation (NYSE:APA). Devon, for example, trades for just four times consensus 2013 cash flow forecasts. Both companies have industry-leading exposure to the highly-productive Permian Basin Shale formation. With their extensive exposure to crude oil, these stocks should prove to be less volatile than gas-only drillers if natural gas prices are hit by profit-taking.

The rare growth stocks in defense
There’s no question defense spending will come under pressure in coming years. The U.S. military will be pressed to come up with cost-saving solutions that also take troops out of harm’s way. This should set a robust long-term growth backdrop for iRobot Corporation (NASDAQ:IRBT), a maker of ruggedized, maneuverable robotic systems, and AeroVironment, Inc. (NASDAQ:AVAV), which makes unmanned aerial drones. They each have appealing non-military divisions as well.

Still, investors are focused on the near-term, perhaps taking note that if the “Fiscal Cliff” comes to pass, then spending on products these firms make might be frozen. Perhaps this will be the case, but each of these stocks is off by 50% or more from the peaks seen in the past few years, creating a fresh opening for investors who may have missed these attractive stocks before.

Risks to Consider: These stocks could move lower still — a key consideration for short-term investors. Indeed it’s hard to spot a bottom for the market right now, which is why a long-term focus is essential.

Action to Take –> The logic of buying great companies at lows is self-evident: They possess the exact same long-term prospects as they did six or 12 months ago, but can now be had for 25% or more from their peaks, solely due to a lack of timeliness.