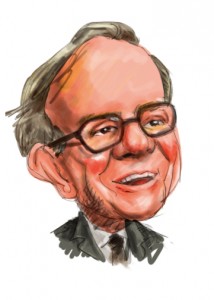 Wells Fargo: These Stocks are Potential Warren Buffett Buys (ValueWalk)
Having the status of Warren Buffett’s favorite stock pick is a title to reckon with. Knowing what this legendary investor likes or dislikes is something that raises a serious debate in the value investing community. Wells Fargo & Company (NYSE:WFC), which is also Warren Buffett’s favorite bank, has released the list of potential buys for Berkshire Hathaway Inc. (NYSE:BRK.A) (NYSE:BRK.B) in its equity research. We don’t agree with it, nonetheless it will be interesting to analyze it. The report enlists a number of stocks based on ROE, debt-to-equity ratio, profit margins and P/E values and raises the question of what Buffet might buy now.

Principles of Financial Success: Billions of Reasons to Think Like Warren Buffett (DecodedScience)
No, he’s not the guy who sang “Margaritaville” in 1977. Warren Buffett is a self-made entrepreneur, number three on the most recent Forbes list of billionaires, with a net worth estimated at $44 billion. Whenever someone of that degree of financial acumen is discussed in any context, the average person starts to think about the last episode of Survivor, or whether Coors tastes better than Budweiser — most people cannot envision that he’s relatable in any way, shape or form to the average person working 40 hours a week at the rendering plant, but they’re wrong. Granted, there may be a passel full of additional zeroes on his balance sheet, but the concepts used to get there are the same, no matter how many digits we’re talking about.

M&T Bank Gains After Profit Beats Analysts’ Estimates (BusinessWeek)
M&T Bank Corp., the lender that counts Warren Buffett’s Berkshire Hathaway Inc. among its largest shareholders, rose the most in almost a year after posting a third-quarter profit that beat analysts’ estimates. M&T climbed 6.4 percent to $103.57 at 9:49 a.m. in New York, the most since November. Shares advanced 28 percent this year through yesterday, matching the gains of the 24-company KBW Bank Index. (BKX)

Buffett’s alpha: Secrets of a successful investor (InvestmentWeek)
For more than 30 years, Buffett’s Berkshire Hathaway has delivered a better risk-adjusted performance than any other stock or US mutual fund. The paper, written by researchers at New York University and AQR Capital Management, says Buffett’s success is partly down to how he has boosted his returns with leverage and has stuck to his strategy for the long term.

Make Your Money Count: 5 Ways Investments Can Be Influential (Forbes)
Warren Buffett has the unique distinction of being one of the richest people in the world and also one of the most beloved for his philanthropic efforts. He states, “Of the billionaires I have known, money just brings out the basic traits in them. If they were jerks before they had money, they are simply jerks with a billion dollars.” The time to build your core character is prior to being of means, not during or after. Here are 5 practical, accessible strategies for investing your extra dollars that can make a positive influence, whether you have a little or a lot:

What Do Snoop Dogg and Warren Buffett Have in Common? Both Are Included in Ancestry.com’s Updated Yearbook Collection (SYS-CON)
Ancestry.com, the world’s largest online family history resource, announced today that it has added more than 18,000 yearbooks to its growing U.S. Yearbook Collection. The new additions, spanning 1806-2008, include schools across the United States, from junior highs and high schools to colleges and universities. Visitors can browse this rich collection for a glimpse into relatives’, friends’ and celebrities’ past, from more formal class portraits to team photos and fun, candid shots. In total, the collection now stands at 53,000 yearbooks and approximately seven million images.

Howard Buffett’s challenge to farmers: Return an acre’s profit (DesMoinesRegister)
Farmer and philanthropist Howard Buffett challenged all American farmers to donate the profits from at least one acre of their harvest to their local food banks in an effort to eradicate hunger nationwide. Buffett, the son of Omaha billionaire investor Warren Buffett, pushed for the donations during his keynote address at the Iowa Hunger Summit, part of the World Food Prize activities on Tuesday in Des Moines. Buffett’s private foundation, the Howard G. Buffett Foundation, has partnered with agricultural companies ADM and Monsanto and the hunger-fighting charity Feeding America to create the Invest an Acre program.

You Are Only One Insight Away From Being As Rich as Warren Buffett, Bill Gates, Alice Walton Or Oprah (Forbes)
On one level of course, the headline is obvious. The insight that leads you to cure the common cold; create that perpetual motion machine or explain why Ryan Seacrest is highly paid and everywhere should make you as rich as if not Larry Ellison than at least Croesus. …Think back to the hype surrounding Facebook going public. Before the IPO, investors in general, and owners of small businesses and start-ups in particular, were focused on the literally billions of dollars company founder Mark Zuckerberg would make the moment his firm was public.

Warren Buffett Bets on Biotech (WealthDaily)
We’re all familiar with Warren Buffett’s legendary investing acuity. His decisions have proved themselves in the market over and over, and investors know to pay attention to Berkshire Hathaway’s (NYSE: BRK.A) fortunes. Last week, Berkshire bought 217,597 shares of DaVita Inc. (NYSE:DVA) for $109.76 a share (total value $23.88 million). At the end of business on Friday, Berkshire held 10,483,112 DaVita shares for total holdings of almost $1.15 billion.