Is Walmart Inc. (WMT) A Good Stock To Buy According To Hedge Funds?

Is Walmart Inc. (NYSE:WMT) a superb investment today? Money managers are betting on the stock. The number of bullish hedge fund positions advanced by 8 in recent months. Our calculations also showed that WMT isn’t among the 30 most popular stocks among hedge funds.

What have hedge funds been doing with Walmart Inc. (NYSE:WMT)?

Heading into the fourth quarter of 2018, a total of 60 of the hedge funds tracked by Insider Monkey were long this stock, a change of 15% from the previous quarter. Below, you can check out the change in hedge fund sentiment towards WMT over the last 13 quarters. With hedgies’ capital changing hands, there exists an “upper tier” of notable hedge fund managers who were upping their stakes substantially (or already accumulated large positions). 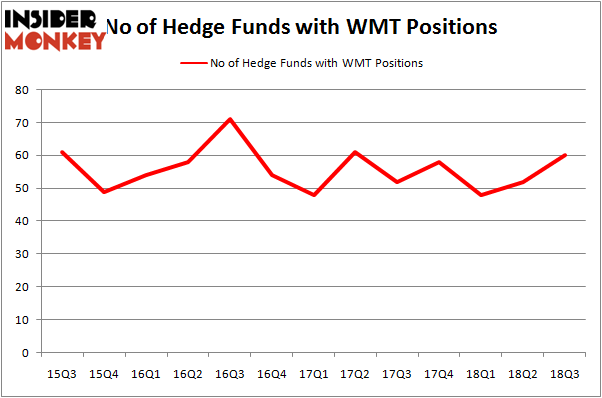 Of the funds tracked by Insider Monkey, Bill & Melinda Gates Foundation Trust, managed by Michael Larson, holds the number one position in Walmart Inc. (NYSE:WMT). Bill & Melinda Gates Foundation Trust has a $1.09 billion position in the stock, comprising 4.2% of its 13F portfolio. The second largest stake is held by Fisher Asset Management, managed by Ken Fisher, which holds a $932.7 million position; the fund has 1.1% of its 13F portfolio invested in the stock. Other hedge funds and institutional investors that are bullish encompass Cliff Asness’s AQR Capital Management, Phill Gross and Robert Atchinson’s Adage Capital Management and Richard S. Pzena’s Pzena Investment Management.

Now, some big names were leading the bulls’ herd. Masters Capital Management, managed by Mike Masters, assembled the biggest call position in Walmart Inc. (NYSE:WMT). Masters Capital Management had $187.8 million invested in the company at the end of the quarter. Brandon Haley’s Holocene Advisors also made a $126.5 million investment in the stock during the quarter. The other funds with new positions in the stock are Steve Cohen’s Point72 Asset Management, Israel Englander’s Millennium Management, and Larry Foley and Paul Farrell’s Bronson Point Partners.

As you can see these stocks had an average of 53.25 hedge funds with bullish positions and the average amount invested in these stocks was $10.57 billion. That figure was $4.72 billion in WMT’s case. Wells Fargo & Company (NYSE:WFC) is the most popular stock in this table. On the other hand Nestle SA Reg Shs. Ser. B Spons (OTCMKTS:NSRGY) is the least popular one with only 5 bullish hedge fund positions. Walmart Inc. (NYSE:WMT) is not the most popular stock in this group but hedge fund interest is still above average. This is a slightly positive signal but we’d rather spend our time researching stocks that hedge funds are piling on. In this regard WFC might be a better candidate to consider a long position.