Monthly auto sales are continuing to charge back from their incredible lows in 2009: To really put that into perspective, we’ve seen almost as many car sales through the first eight months of 2013 as we did in all of 2009, which even included the huge spike as a result of the Car Allowance Rebate System — or, as you probably knew it, “cash for clunkers”: In the midst of this huge rebound, we’ve also seen the stocks of three of the largest automakers — Ford Motor Company (NYSE:F), Toyota Motor Corporation (ADR) (NYSE:TM), and General Motors Company (NYSE:GM) — crush the market over the past year: 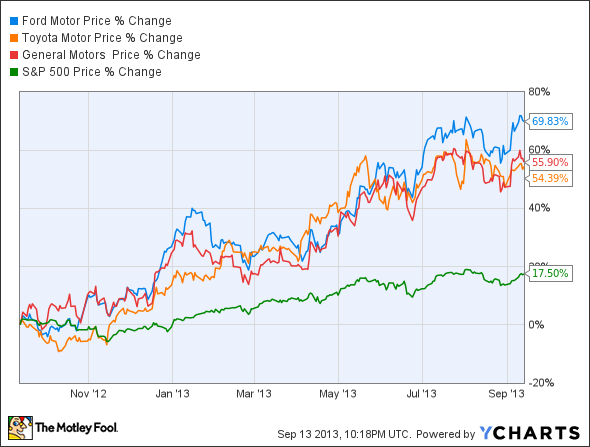 Someone has to finance those new cars on the roads. That’s where the banks come in. Here’s what four major holders of automobile loans have on their balance sheets:

But that doesn’t give the clearest picture as to who is benefiting, as two of those banks have been especially aggressive in charging into the automotive space: Yet even though Capital One Financial Corp. (NYSE:COF) and PNC Financial Services (NYSE:PNC) have seen their automobile loans held skyrocket, that tells only half the story. Since those two banks have a smaller starting-point number, the growth looks huge. But Wells and JPMorgan Chase & Co. (NYSE:JPM) have a much larger balance sheet, so overall origination volume may provide a better picture of which bank is being the most aggressive:

Here we see that Wells Fargo & Co (NYSE:WFC) is the market leader in originations, issuing over 30% more than JPMorgan, its closest competitor. It should be noted that although PNC has been aggressively adding loans to its balance sheet, it doesn’t disclose its originations. New loans will move the needle more at Capital One and PNC, but the two giants look as if they will continue to dominate the space.

With both rates and new car purchases expected to rise, investors could see the big banks take advantage of the same trends that have the automakers set to benefit.

The article Wall Street Titans Are Loving the Ford and GM Comebacks originally appeared on Fool.com and is written by Patrick Morris.