Drugstores should make viable investments going forward as a way to play the demand for drugs that will inevitably increase with an aging population that’s led by the baby boomers. The Affordable Care Act, or “Obamacare,” should also fuel demand for cheaper generics, as well as generate more foot traffic in stores such as Walgreen Company (NYSE:WAG) and CVS Caremark Corporation (NYSE:CVS). So which drugstore makes a better investment for the future?

It’s all about generics…

CVS Caremark recently reported stellar earnings, claiming that it would be able to retain up to 60% of former Walgreen customers who were obtained after Walgreen’s dispute with Express Scripts Holding Company (NASDAQ:ESRX). CVS Caremark Corporation (NYSE:CVS) was also helped by a more severe flu season than usual, as well as by increased profits from generic drugs, which tend to generate less revenue but increased profits due to higher margins. 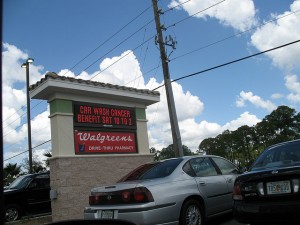 Walgreen Company (NYSE:WAG) has also benefited from the increased sales of generics. This is why drugstores seem to make a more viable investment over the long term than drug makers. When drug makers lose patents on their bread-and-butter, cash-cow blockbuster drugs (a.k.a. falling off the “patent cliff”), they can potentially lose millions and sometimes even billions of dollars. Drugstores don’t care as much because they can sell generics of the former blockbuster and earn higher profits from them.

Walgreen looks like it now has a nice competitive advantage over CVS Caremark Corporation (NYSE:CVS) relating to generics, as well. After signinga decade-long deal with AmerisourceBergen Corp. (NYSE:ABC), Walgreen Company (NYSE:WAG) is looking to direct its distribution duties to AmerisourceBergen instead of distributing around 80% of its drugs on its own. Amerisource Bergen says that the contract could be worth up to $28 billion in fiscal 2014. Walgreen CEO Greg Wasson commented

“…AmerisourceBergen are experts in pharmaceutical supply chain distribution… We are very good at it, but the combination of what they both do to improve our supply chain, take that off of our hands, and improve our service levels is really the opportunity that we are excited about.”

The deal was huge for AmerisourceBergen, and if Walgreen Company (NYSE:WAG) decides to exercise its right to eventually purchase up to 23% of its new distribution partner, it will be Amerisource’s largest shareholder. AmerisourceBergen Corp. (NYSE:ABC) recently reported its fiscal second-quarter earnings– which fell 78%. Revenue, however, saw slight growth, while gross margins climbed slightly higher.

With Walgreen as its new partner and potential minority stakeholder, the company also has much better growth prospects going forward– and has raised its revenue forecasts. Earnings for the full year are still expected to be on the lower side, however. The company has also received a string of positive analyst upgrades lately, which should inject some more momentum into the stock going forward.

AmerisourceBergen may also be one of the most attractive plays to capture the growing trend in generics, as well– especially with all the new sales that should materialize from its new partnership with the world’s-largest drugstore.

Walgreen Company (NYSE:WAG) should be of great help to AmerisourceBergen’s improved and sustainable profitability going forward. In turn, AmerisourceBergen will help Walgreen not only to grow in size and scale, but also negotiate better prices for lower-profit branded-prescription drugs that the company sells in bulk. AmerisourceBergen will also give Walgreen a more consolidated distribution network in not only the U.S. but in Europe as well–which brings us to our next topic.

CVS Caremark Corporation (NYSE:CVS) is almost exclusively based in the United States, and Walgreen Company (NYSE:WAG) used to be. That all changed when the company announced it would be partnering and also purchasing a large stake in the United Kingdom’s largest drugstore — Alliance Boots.

The deal put Walgreen outside of the U.S. and opened up new possibilities that don’t exist for stateside competitors such as CVS. The partnership now allows for further expansion and growth, as Walgreen plans to be the first-and-largest drugstore chain in the global marketplace.

Walgreen Company (NYSE:WAG), with Alliance Boots, is also looking to get into the emerging markets, after Alliance Boots spent $90 million to buy a 12% stake in Nanjing Pharmaceutical, China’s fifth-largest drug wholesaler. CVS Caremark Corporation (NYSE:CVS) is looking to follow Walgreen into international territory, albeit slowly.